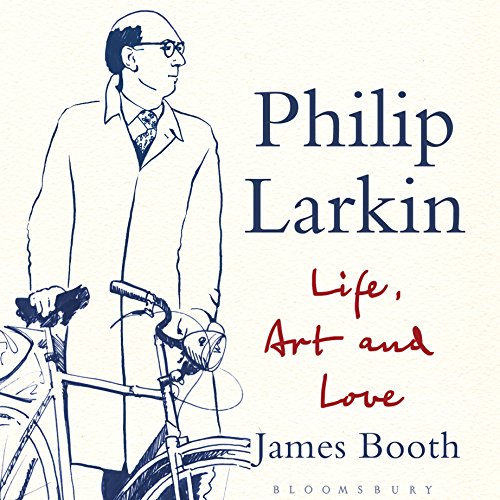 Philip Larkin (1922-1985) is one of the most beloved poets in English. Yet after his death a largely negative image of the man himself took hold; he has been portrayed as a racist, a misogynist and a narcissist. Now Larkin scholar James Booth, for seventeen years a colleague of the poet's at the University of Hull, offers a very different portrait. Drawn from years of research and a wide variety of Larkin's friends and correspondents, this is the most comprehensive portrait of the poet yet published.

Booth traces the events that shaped Larkin in his formative years, from his early life when his his political instincts were neutralised by exposure to his father's controversial Nazi values. He studies how the academic environment and the competition he felt with colleagues such as Kingsley Amis informed not only Larkin's poetry, but also his little-known ambitions as a novelist.

Through the places and people Larkin encountered over the course of his life, including Monica Jones, with whom he had a tumultuous but enduring relationship, Booth pieces together an image of a rather reserved and gentle man, whose personality - and poetry - have been misinterpreted by decades of academic study. Philip Larkin: Life, Art and Love reveals the man behind the words as he has never been seen before.

Fell in love withthe poetry if not the man.

I am coming to poetry very late in life. It was poorly taught at school in the late 50's. I only went to Auden after 4 Weddings and a Funeral and so you will understand what a novice I am. I knew who Larkin was, that he was a Librarian,used four letter words, was at my husband's college at Oxford and after his death was found to be a bit of a racist who liked pornography. After our parents died my brother quoted the line of what Larkin thought our parents did to us.
Enough to say that after listening to James Booth's masterful biography I have the Complete Poems, Required Writing and the CD of the Sunday Sessions on order.I really appreciated the format of making continual reference to how and when the poetry was being written and its connection to the people.places and events in his life.I had a friend who used to stamp Einstein's library books at Princeton and there must be many students who now associate their time at Hull with the Library.Kudos to the reader -beautifully done.

Would you try another book written by James Booth or narrated by Derek Perkins?

Yes, I'd read a book by James Booth about someone he is less embarrassingly personally biased towards. The close, sensitive readings of the poems are excellent and beautifully done. The constant praise and defence of Larkin's personality - often contradicting and dismissing Larkin's own serious self-criticism - is deeply off-putting. It's annoying throughout the book but becomes appalling and offensive in the section excusing Larkin's racist language (which, broadly, adopts the theory that it's totally okay and ironic to refer to immigrants as niggers and pakis, provided you have a brown colleague somewhere who you are polite to). There's also an unintentionally hilarious moment when Booth proposes that Larkin is sexually involved with 2 women at once because he's too kind and considerate to break either's heart (again, dismissing Larkin's own scathing analysis of his own motives as misplaced 'guilt'). In general, I think that the book would have been much much better if all the barrister-for-defence stuff was dropped and he let Larkin do more of the talking.

What could James Booth have done to make this a more enjoyable book for you?

He could have avoided editorialising so extensively on Larkin's personality. I'm interested in Larkin's work and his life, on which James Booth is an expert. I'm not interested in James Booth's view on what counts as harmless racism and when cheating is altruistic - he's clearly not an expert in moral philosophy and it's both boring and embarrassing to have to listen to him go on and on in speeches for the defence that are built on such tenuous foundations.

Was Philip Larkin worth the listening time?

7 of 7 people found this review helpful

More than a biography.

This is much more than a mundane tale of Larkin's life. Little time is wasted on his childhood nor his parents lives which is a blessed relief, but a huge amount of time is spent studying his poetry and prose and linking them with his life's story.
I really enjoyed the approach as it didn't simply paint a picture of the writer/librarian but gave me a deeper understanding of his work and his motivation for it.
The tone is quite dry and scholarly and I learned some new words (metonymy and diphthong spring immediately to mind) and neither the poet's life nor his work excites much if any emotional response in the author. This is no bad thing. In fact it is a refreshing antidote to the twenty first century predilection for hyperbole and vicarious exaggeration of and obsession with, the live styles of so called celebrities.
Larkin's life was not extraordinary, his talent was. This book lays that out clearly and unambiguously for the reader and is a vital companion to his work.