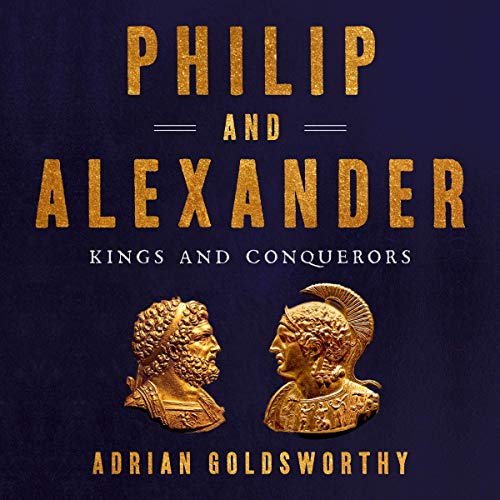 This definitive biography of one of history's most influential father-son duos tells the story of two rulers who gripped the world - and their rise and fall from power.

Alexander the Great's conquests staggered the world. He led his army across thousands of miles, overthrowing the greatest empires of his time and building a new one in their place. He claimed to be the son of a god, but he was actually the son of Philip II of Macedon.

Philip inherited a minor kingdom that was on the verge of dismemberment, but despite his youth and inexperience, he made Macedonia dominant throughout Greece. It was Philip who created the armies that Alexander led into war against Persia. In Philip and Alexander, classical historian Adrian Goldsworthy shows that without the work and influence of his father, Alexander could not have achieved so much. This is the groundbreaking biography of two men who together conquered the world.

"An impressive dual biography.... Goldsworthy expertly mines ancient sources to parse fact from legend.... This is a fascinating and richly detailed look at two men who 'changed the course of history.'" (Publishers Weekly)

"Riveting...Goldsworthy is the best sort of writer on ancient times. He eschews psychohistory, explains the wildly unfamiliar culture of that era, and speculates carefully...An outstandingly fresh look at well-trodden ground." (Kirkus, starred review)

"Philip and Alexander is another wonderful product of Adrian Goldsworthy's historical craft - sterling scholarship, engaging prose, insightful analysis, and unbiased assessment. Goldsworthy explores brilliantly the complex relationship between father and son, the failure of the Greek city-states to stop them, the proper credit for the Macedonian expansion, and the megalomania of Alexander's near global conquests. A brilliant account of how father and son changed the world, for both good and bad." (Victor Davis Hanson, author of A War Like No Other: How the Athenians and Spartans Fought the Peloponnesian War)

What listeners say about Philip and Alexander

Low quality, and the hissing S sounds make it unbearable for people with that particular form of misophonia.

A great piece of writing with steady, clear reading. However no consistency or normalcy in pronunciation. “Roxanne” is pronounced at least three different ways throughout the book, as an example. Same with “Patroclus” and others. Would take me out of it/require me to slow down and wonder what they were referring to. All in all a great book, though.

I liked this book, but the annoying voice of the narrator didn't make it enjoyable to listen to. Hearing him lisp the name Demosthenes is truly something scary.

Not being a scholar on Ancient Greece or that era I found myself having to research names and places. I found that once I studied an ancient map of the area and did some homework the book became easier to comprehend. Loads of information and journal accounts.

As Always, Everett Nailed It

I haven’t read a book by the guy that isn’t great. I feel like he’s reputable and will tell you when the sources don’t provide any detail on certain events.

Another remarkable book by Adrian Goldsworthy!

An extremely fascinating look into the Hellenistic world, the insight into King Philip's Life brings a lot of new perspective. Then the in-depth historical coverage of Alexander's life is awesome to hear. As always Adrian Goldsworthy does an amazing job keeping it to just the facts without making up facts to support his version of history. This gives you the most encompassing and accurate view of what we know actually happened! Neil Dixon does a great job with the book however I do wish that had been Derek Perkins like Adrian Goldsworthy's other books on Audible.

Nice fresh objective take on the story of Alexander and a good view at his underrated father Philip.

it was excellent fantastic performance and extremely will researched. I thoroughly enjoyed it. check it out