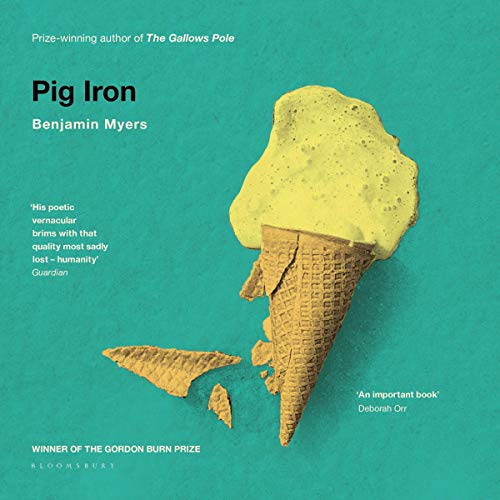 Winner of The Gordon Burn Prize

An unflinching portrait of contemporary Traveller culture by the award-winning author of The Gallows Pole.

John-John wants to escape his past. But the legacy of brutality left by his boxer father, King of the Gypsies, Mac Wisdom, overshadows his life. His new job as an ice cream man should offer freedom but instead pulls him into the dark recesses of a northern town where his family name is mud. When he attempts to trade prejudice and parole officers for the solace of the rural landscape, Mac’s bloody downfall threatens John-John’s very survival.

"Pig Iron is an important book because it tells a story that has shaped all contemporary Western humans, but is routinely, inexplicably overlooked - the great move from agricultural life to industrial life. The respect in which that shapes human culture and individual humans." (Judge Deborah Orr)

"His poetic vernacular brims with that quality most sadly lost - humanity." (Guardian)

"One of my best reads this year... A deeply rural story, a book full of passion for the English countryside and centred on the conflict between the travelling and the settled community. A very fine read indeed, it expresses a life view almost never examined in our narrow literary culture." (Melvin Burgess)

What listeners say about Pig Iron

Loved every moment. I could see everything, even the grim bits. The writer is a genius

I came at this because I wanted to hear Ralph Iverson's narration, which is great, but a little confusing at first. The story flits between two voices and I didn't find the transitions / different voices were clear. However, if you go in knowing that you will more easily be able to appreciate a highly original story. A word of warning to any sensitive types; this is a tough listen, full of dark characters that don't pull any punches- literally!!!

A massive struggle at times.

Not for the sensitive or faint hearted.
It is extremely upsetting and hard going in parts.