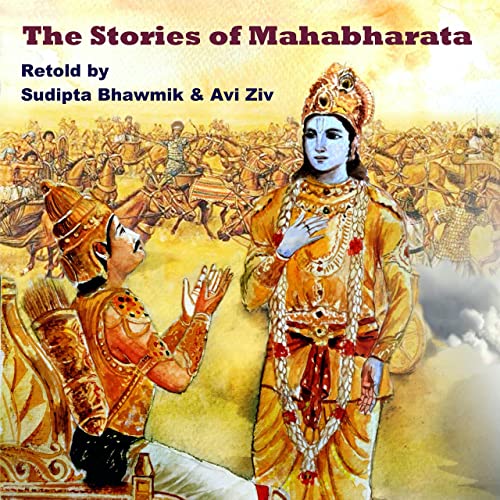 The Stories of Mahabharata

What listeners say about The Stories of Mahabharata

The Mahabharata is a very diverse story. Sudipta says it so well. It's amazing.

I found these episodes even better than those televised ones be it B.R chopra one or Star Plus Mahabharata

I have searched the entire net for the remaining episodes and could not find it. Hence I request the author to kindly upload the remain episodes and provide us the path to heaven by listening.
Thank you

Never thought that Listening to the Stories of Mahabaratha would be an addiction. Simply Great!!

I think the story of Mahabharata doesn't end at Abhimanyu's death. Please put some more episodes regarding what happened after Abhimanyu's death, till the 'Sarpayaga' (snake killing ceremony) conducted by Janamejaya, Abhimanyu's grandson.

it has so much detailed information I'm literally very happy that I discovered this ❤️ the way the description is there and the music the accuracy . I'm literally waiting for the next episode ❤️ .

I have just became a fan of Sudipta sir, this is beyond imagination. expecting more mytho stories from him

I really like this ❤️ Mahabharat by Sudipta bhawmik. music and voice are amazing

I loved this production. I couldn't stop listening. Imagine my surprise when I reached the last episode and was left dangling in midair. Can someone please tell me how I can find the rest of the episodes? Once again, I want to thank Mr. Bhawmik and Mr. Azi for a presentation Worthy of the Mahabharata.

This is officially the best way to experience the Mahabharata on audible. I binged it to oblivion and now I'm just waiting for them to catch up. This has absolutely piqued my interest in Hinduism.

The stories of the Mahabharata come alive with passionate narration, mystical music and cosmic sound effects. I enjoy binge listening to this instead of watching boring Hollywood garbage.