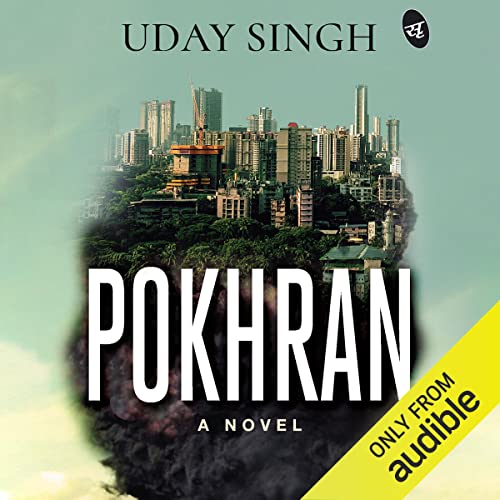 The success of the ‘Smiling Buddha' nuclear test marked the rise of India as a nuclear power in 1974. But what went unreported in the media was the nuclear fallout that had lasting impact on the inhabitants of Pokhran, especially Chaitanya.

It quickly becomes clear that the conspiracy surrounding this radioactive fallout runs pretty deep in the establishment. Those who have had a hand in covering it up are willing to go to great lengths to ensure that the secrets stay buried.

Chaitanya sets on a journey to expose the truth. With Zara by his side, he is sure to bring justice to his people. But when fate snatches Zara away from him, he is consumed by revenge. Undeterred by threats, he embarks on a mission that takes him from the deserts of Pokhran to those of Syria, and into the halls of MIT.

A heady thriller, at its very core, Pokhran is an exceptional journey of revenge, courage, love and the unbeatable human spirit.

What listeners say about Pokhran

the opening was good and then narration takes a different but interesting route but the climax twist and concept that the author wanted felt forced in the story line. The narrator was good especially the modulation. overall one gets hooked on to the story.

Though a story connected but final thought is really interesting to think about it. Good read

loved it... was planning to read it since long back.. finally audible makes it happen. the story and the narration is truly commendable. worth reading or listening to this brilliant piece.