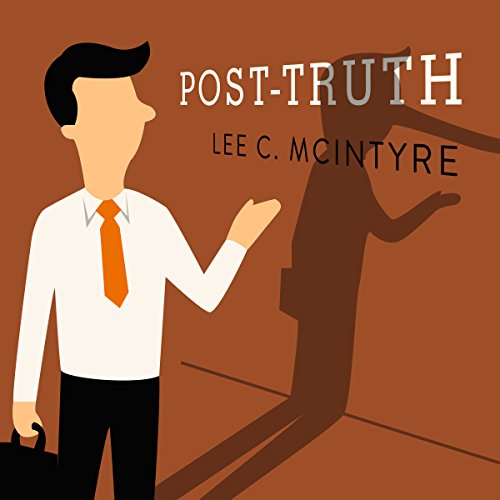 What, exactly, is post-truth? Is it wishful thinking, political spin, mass delusion, bold-faced lying? McIntyre analyzes recent examples - claims about inauguration crowd size, crime statistics, and the popular vote - and finds that post-truth is an assertion of ideological supremacy by which its practitioners try to compel someone to believe something regardless of the evidence.

Yet post-truth didn't begin with the 2016 election; the denial of scientific facts about smoking, evolution, vaccines, and climate change offers a road map for more widespread fact denial. Add to this the wired-in cognitive biases that make us feel that our conclusions are based on good reasoning even when they are not, the decline of traditional media and the rise of social media, and the emergence of fake news as a political tool, and we have the ideal conditions for post-truth. McIntyre also argues provocatively that the right wing borrowed from postmodernism - specifically, the idea that there is no such thing as objective truth - in its attacks on science and facts.

McIntyre argues that we can fight post-truth, and that the first step in fighting post-truth is to understand it.

What listeners say about Post-Truth

5 factors that influence our current and polarized political climate are used as categories under which McIntyre details one of the biggest challenges to democracy: untruth as a political currency.

Unsatisfying Analysis of an Important Issue

Because his analysis is deeply overshadowed by current political events and the Psychopathy of the Current Occupant of the Oval Office, the book ultimately fails to address the real threat facing Western Society.

McIntyre does a good job of describing Truth and Falsehood and the struggles the culture has had in presenting Truth down through History. He recounts the confrontation of Ideology and Truth in the Tobacco hearings of the 50’s and 60’s and the strategies of corporations on Climate Change and the role of Fake News and Social Media in these battles.

His lists of the psychological issues that allow people to be receptive to falsehoods are convincing. But where I felt the book fell short was in its omission of the metaphysics of Truth and his recommendations of how to hold onto it.

He seems to say we all know Truth is important and we’re smart enough to demand it and so, we should use our Big Brains to get it. The success of the current Administration over the last three plus years prove that the American Public, at least, is not convinced of the importance of Truth or any attempt to discover it and that they’re not smart enough to get it.

Perhaps I wanted a Philosophy Text to address these issues. If so, I was disappointed, hence Three Stars.
I think the man-in-the-street tone of the narrator may also have contributed.

The only interesting chapter was chapter 6

This chapter deals with the right-wing "hijacking" of leftist post-modernist theories, which reminds the "hijacking" of democratic institutions by what would develop into fascist regimes (see Hannah Arendt's "The Origins of Totalitarianism").
The rest of the book, and especially the last chapter ("what can WE do about it") is an extremely abridged introduction to social psychology, communications research, and the Trump 2016 campaign.
I guess I set my expectations too high.

A gift for that uncle of yours

A thorough covering of a timely topic. Meaty stuff. A potential gift for those struggling with current events.