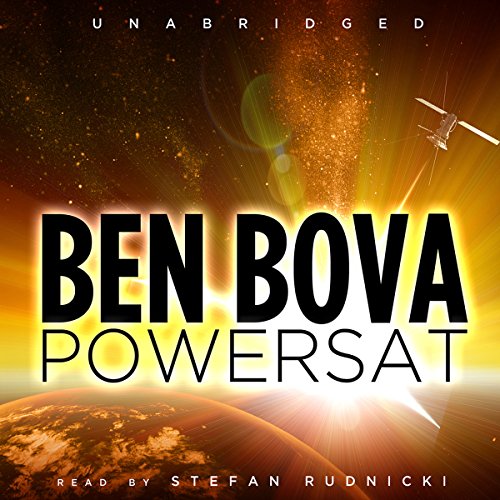 Two hundred thousand feet up, things go horribly wrong. An experimental low-orbit spaceplane breaks up on reentry, falling to earth over a trail hundreds of miles long. And in its wake is the beginning of the most important mission in the history of spaceflight.

Americans needs energy, and Dan Randolph is determined to give it to them. He dreams of an array of geosynchronous powersats, satellites that gather solar energy and beam it to generators on Earth, freeing America from its addiction to fossil fuels and breaking the power of the oil cartels forever. But the wreck of the spaceplane has left his company, Astro Manufacturing, on the edge of bankruptcy.

Worse, Dan discovers that the plane was sabotaged. And whoever brought it down is willing—and able—to kill again to keep Astro grounded.

Now Dan has to thread a dangerous maze. The visible threats are bad enough: Rival firms want to buy him out and take control of his dreams. His former lover wants to co-opt his unlimited-energy idea as a campaign plank for the candidate she’s grooming for the presidency. NASA and the FAA want to shut down his maverick firm. And his creditors are breathing down his neck.

Making matters even more dangerous, an international organization of terrorists sees the powersat as a threat to their own oil-based power. And they’ve figured out how to use it as a weapon in their war against the West.

A sweeping mix of space, murder, romance, politics, secrets, and betrayal, Powersat will take you to the edge of space and the dawning of a new world.

What listeners say about Powersat

this is a great story Ben Bova has done a great job with it and the narrator Stefan Rudnicki does a fantastic job as always HOWEVER there are several places throughout the book where all the different "takes" from the author are included one after another. what i mean is a sentence is repeated three or four times each time with a slightly different inflection in the narrators voice. then the story just continues on as normal for a while till you get to the next one. I'm half way through the book and so far the most notable occurrence of this is in chapter 24 starting about 3:40.
Very annoying. this needs to be fixed and re-released

This is a good thriller with interesting characters and a decently-paced plot. Not much action until the climax, but the build-up is worth it. Stefan Rudnicki is an excellent narrator who does a good job with accents and expression. I would have given it a higher overall rating, but the poor editing is unacceptable for a commercial offering. Still, if you can look past the mistakes, it's worth a listen.

An Interesting Beginning to the Grand Tour

This was a nice slow-burn story that sets the stage for all of the turmoil that readers of Bova's other Grand Tour books will know is coming.

THE BAD:
A few of the characters are very one-note, to the point of breaking your immersion and wondering "Who would EVER do that?"
The overall message of "TOO MUCH GOVERNMENT OVERSIGHT IS BAD FOR BUISINESS!" and "BIG BUSINESS IS CORRUPT AND DANGEROUS!" and "GOVERNMENT AND BUISNESS MUST WORK TOGETHER!" is wielded with all the subtly of a marching band going through your bedroom at 3 AM.

THE GOOD:
Bova, as usual, manages to smoothly weave an intricate tale with many multi-faceted factions, without ever needlessly bogging-down the pacing. While not the most action packed book, the story builds up slowly, but surely, to a satisfying conclusion, despite the weakness of some of the characters.

THE CONCLUSION:
If you've been wanting get into the Grand Tour books, you should definitely start here at the beginning. While there are certainly better books in the series, Powersat introduces so many characters and concepts that echo through all of the later stories to come, you would be do a disservice to yourself if you skipped it.

One of the better Bova novels. Dan Randolf is very much like Keith Stoner. I wish Bova would make the characters a bit smarter, more like Markov from the Voyager series. Sometimes it's like watching a horror film and wanting to scream "turn around" at the characters. Does the hero have to be a petulant child? Rudniki's accents (especially Russian) are fabulous. I have to say that Rudniki's narration is a strong reason I continue with these books.

Not the best from Ben Bova

I am ambivalent on this question. I kept waiting for resolution, and it left me mildly dissappointed.

Has Powersat turned you off from other books in this genre?

Yes, notwithstanding this presentation, I am a Ben Bova fan, esp. the Solar System series. Difficult to ignore the impact of Bova in the speculative fiction genre.

What does Stefan Rudnicki bring to the story that you wouldn’t experience if you just read the book?

Stefan owns Bova ( or maybe it's the other way around?! ) His accents, his dynamics, his nuance. One of my favourite performers, esp. of Bova.
Therefore, he brings this story to life far better than my imagination ever could at this point.


Did Powersat inspire you to do anything?

Cut back on petroleum usage.

Unusual for Bova in the sense that this book is largely a free standing effort. Even more political in nature than previous efforts, it loses the plot sometimes as it get's hung up on politics ( White House, oil, sexual, etc. ) and that does diminish it, for me at least.

A qualified thumbs up, with many caveats however.

What made the experience of listening to Powersat the most enjoyable?

Excellent performance and a great idea.

As it was meant to set the stage for the rest of the series it ended pretty much as expected. This is probably the biggest fault of the book, it's not very original in it's execution.

As much as I admire the idea the book hasn't really aged all that well. One example is that one of the characters feels the need to explain the term "wind farm" to another (side) character.

Overall, as said above, the idea of the Powersat etc. is interesting, the science appears to me solid too. Where it falls down is just how cliched the characters and their actions are. There was no surprise in it for me.

So I give it an A for the idea, but only a D for the execution.

I would have passed this over had I not seen the Grand Tour banner attached to the title.
It's a political thriller with plausible science unpinning the narrative. As far as the Grand Tour goes, I am looking forward to more exploration of the outer solar system, but this satisfied me for now.

While it is a shame that Blackstone released this somewhat rough cut instead of a properly edited recording, I can't say that it was terribly upsetting to me personally. Stephen Rudnicki is such a wonderfully gifted narrater, it was interesting to hear his alternate inflections and retakes. But please, Blackstone, this is not podiobooks, you're getting paid, so next time review your work before selling it.

I quite enjoyed the ending, all through the story hours invested in some of the characters and I hoped that they would be a happy ending for all that twist at the end of the story was brilliant.

A concept much talk about, beaming energy from space via microwaves, woven into a mystery story and a tragic story of lose loves. All spiced up with the typical terrorist and greedy industrial oil giants. in fact lost of greed and wild ambition. The result a fast moving realistic tale and a great listen.

I want the Powersat to work!

This is an older book so some of the technology is behind the times now. But everything else is relevant--the political, corporate, and international backstabbing are all still very timely. The human interest level here is supplied by the separation of the main character and his would-be wife. She went off to Washington and he went off to space; they can't get over each other, can't leave their other love. And then they did stupid things like disparage the other's life choice: "You still playing in space?" and "You care about that political crap?"

You would thing that cheap, renewable, clean energy would be everyone's dream, but it isn't. The oil, coal and automobile industries would suffer, and the countries that depend on exports of these would be bankrupted, so there is lots of opposition to this concept that would really benefit the world.

The characters are real enough that we lament their deaths, or cheer their downfall. The narration is great. The story is long and satisfying. All in all a good read with technology, corporate espionage, political playoffs, thug intimidation, and greed, greed that cares not a whit what corpses lie in its wake.

What made the experience of listening to Powersat the most enjoyable?

The story itself, I like a techno thriller and this delivered on that well. But I find Stefan Rudnicki's voice to be very mono-tone which makes is a hard listen.

I found his voice to be very mono-tone, but the most annoying thing was the editing. There are at least 15 bad edits in this audiobook if not more. Many times a sentence or partial sentence is repeated, and in one case it was repeated twice. This is by far the worsted edited audiobook in my audible library of around 100 books.