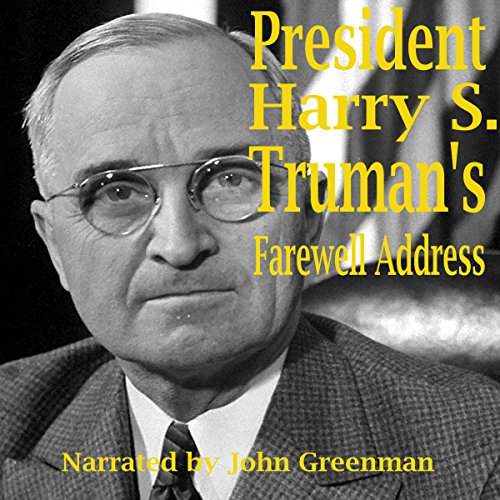 Harry S. Truman (May 8, 1884-December 26, 1972) was the thirty-third president of the United States (1945-53). As the final running mate of President Franklin D. Roosevelt in 1944, Truman assumed the presidency on April 12, 1945, when Roosevelt died after months of declining health. Under Truman the Allies successfully concluded World War II; in the aftermath of the conflict, tensions with the Soviet Union increased, marking the start of the Cold War.

Truman's administration decided to use atomic bombs on Japan in World War II; it oversaw the Berlin Airlift in 1948 and the creation of the NATO in 1949 and committed the United States to the Korean War in 1950.

Why NotPresent This in Truman's Own Voice?

What made the experience of listening to President Harry S. Truman's Farewell Address the most enjoyable?

The quality of the speech, but my mind kept wandering, wondering why the speech wasn't presented by President Truman himself.

Hearing a little moment in history.

Radio was alive and well when President Truman left office. Surely there are easilt accessible recordings of this speech in Truman's own voice.

If you could give President Harry S. Truman's Farewell Address a new subtitle, what would it be?

"Disappointingly Not Narrated by its Author"

Don't bother getting this recording.