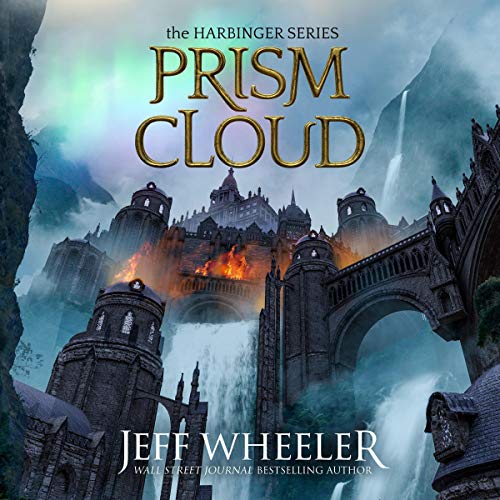 When the emperor is assassinated, Sera Fitzempress is the noble most eligible to inherit the empire. Her upcoming marriage to the prince would cement her position. And as a champion for peace, Sera is the only promise of hope for staving off war between the worlds of Kingfountain and Muirwood. But standing between her and her enemies is just one devastating secret.

Sera’s best friend, Cettie, a girl born of a lower class, has made a shattering discovery: her entire existence has been a lie. Now Cettie must give up the only life she’s known and fought for and leave behind the man she loves to stop Sera’s wedding. For this discovery could bring the whole of Kingfountain to ruin.

As Cettie struggles to determine her true loyalties and loves, her allies fall to wicked plots, and she becomes increasingly alone on her journey to a destiny she never wanted - one that could ignite an unstoppable war.

What listeners say about Prism Cloud

I've read many books from this world now. The first couple in his series are usually pretty good and then they get drawn out and more boring as you read/listen. I couldn't finish it and that almost never happens to me

Sometimes you just don't like the direction a plot takes. That is what happened here.

It's almost the end of this series...

Look this is almost the end of the series, at this point you're either sold on buying the books or you probably shouldn't be listening to them. The story progresses it's still a great listen, Jef Wheeler does a great job with the world building and characters. Kate Rudd is still doing a bang up job with the narration.

The Prism Cloud is a fast moving continuation of the Harbinger series. Sera proceeds with coordination for her wedding to the heir of Kingfountain’s throne in hopes that the union can end the war between the kingdoms. Not everyone in both worlds wants the war to end.

Cettie has had another vision, and sends Lord Fitzroy a message with the details, but does not know whether the information can change the outcome. Cettie follows her real mother, who she does not trust, to Kingfountain to help save the truce and help her friend. In Kingfountain, Cettie feels isolated, uncertain of herself, and questions the truth of the mysteries.

The story includes betrayals in both kingdoms, war, family loses, and other surprises. It is well narrated. I look forward to the conclusion in Book 5.

So glad I got around to trying Jeff Wheeler. Great characters that you care about. There are love stories but not mushy or full of sexual encounters. Kate Rudd does a great job as reader and glad she did the entire series. The magic is interesting and different. Not a bad book amongst them.

kate Rudd is an excellent narrator

kate Rudd has given jeff wheeler's books a depth and vitality I've come to love. Jeff Wheeler tells his tales in such a way you hate to see a series end. Can't wait for the next book

im really enjoying the Harbringer series. of course I'll have to wait for the final book to be finished...patience. but I'm sure it'll be worth the wait.

Jeff does an excellent job of pulling the reader in and wanting more. The first book I read of his was The Queen's Poisoner and I have been addicted to his stories ever since. I enjoy the slight romance that buds between characters but it’s never over the top to make these books inappropriate for younger readers. The way he is able to make the stories flow is just amazing to me. All of his books would make great tv series’ as well.

The story races forward towards the fantastic conclusion in book 5. I have loved the performance and the story of the Harbinger series.

In this book, the love lives and angst of Sera and Cettie with their beloved men feels like an unwanted road construction detour into the pages of a teenage romance novel.

But if you stick with it, the pace continues where it left off before the detour.

when will the story end...

not in this book. great story, but it's getting a little long in the teeth. in lieu of giving the reader some closure on a few of the ongoing storylines, the author keeps adding more ambiguity and unease. probably won't get the next book unless the author finally completes the journey and gives us a proper ending.

always perfect and can't wait for the mext one. thank you very much . Alma