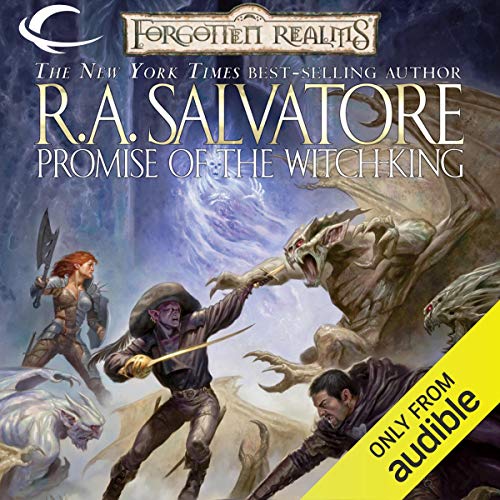 The book was hidden well.

Its pages promised the power of the Witch-King himself.

And now that it’s been found, even the fact that it kills anyone foolish enough to crack its cover won’t stop people from fighting over it.

Welcome to the Bloodstone Lands!

Human assassin Artemis Entreri and his dark elf companion Jarlaxle have come to the demon-haunted wastelands of the frozen north at the request of their dragon patron. It doesn’t take long for them to find themselves caught in the middle of a struggle between powerful forces that would like nothing more than to see them both dead...or worse.

But Entreri and Jarlaxle aren’t just any wandering sellswords, and the ancient evils and bitter blood-feuds of the wild Bloodstone Lands may have finally met their match.

What listeners say about Promise of the Witch-King

Jarlaxle, Artemis and friends on an adventure.

Great chance to see Artemis and Jarlaxle together, great dynamic between the two. Great cast of friends and foes.

easily the greatest book series of all the time the fact that everyone doesn't know about this is such a shame!

Deeper look at the assassins soul

Just listen to it - I’ve been quite glad to dig into this alternative story. Love and adventures

they changed the narrator!!!

I absolutely love these books, I have read the whole Drizzit series and decided to listen to them to get a new perspective on these books. That being said, changing the narrator 16 books in is booty!! And it's only this book! the next one Victor Bevine is narrating! I dont really like Male narrators but I find I absolutely love Victor Bevine. I'm just gonna tough this one out but just know that I am not happy about it.

deeper into other characters.

No drizzt in this one. But much deeper into other characters. Some of the best storytelling yet.

I am really enjoying the stories of these two characters. Their adventures are a nice change of pace from Drizzt and his companions. They are a dynamic anti-hero duo created by Salvatore. The narrations of Victor Bovine are always fantastic. I will be starting the third book in the series as soon as I finish this review. I highly recommend the series.

I was expecting awful when I first saw these 3 of the series would not include Drizzt and would only be about Artemis and Jarlaxel. This is such a good insight into the minds of characters who have been the villains of the story or at least villain adjacent. The way they develop is surprising.

I hate how he says "short-lived".

the book was really great, I was only slightly annoyed with the pronunciation of short-lived.

Just as a background for my review, I’ve read every single installment of this series up until this point...
That being said this was definitely the best so far and that should be considered with great significance being that DRIZZT WASNT EVEN IN IT.

Idk, honestly, great premise, phenomenal character development and a perfect ending leaving so many avenues of possibility for future adventures. Amazing in every sense. Legendary author at the very least. But the. Again...maybe I’m crazy.

A D&D game with your favourite characters

This book plays out much like a game of D&D, banding unlikely allies and two of the series's best characters together into a party and departing on a quest. In doing so it gives an inspiring look at how players at the table might integrate seemingly incompatible characters into a party. Thoroughly enjoyable and filled with tropes that any fan of D&D will enjoy

Excellent book overall, which I thoroughly enjoyed. Not Salvatore's best though sadly, but still a very pleasing continuation of the characters Artemis Entreri and Jarlaxle Baenre

The Lost and Found

A story of two unlikely companions,one a pragmatic/charming drow and the a lost assassin whom find adventure,wealth and themselves.I only wish the third book was on Audible as well (Road of the patriarch)

Another fantastic story wonderfully written by R. A. Salvatore as always, and Victor Bevine is incredible

Just love this series I hope book three comes out with Victor reading it. and I hope that Salvatore writes more of jarlaxe's story!!