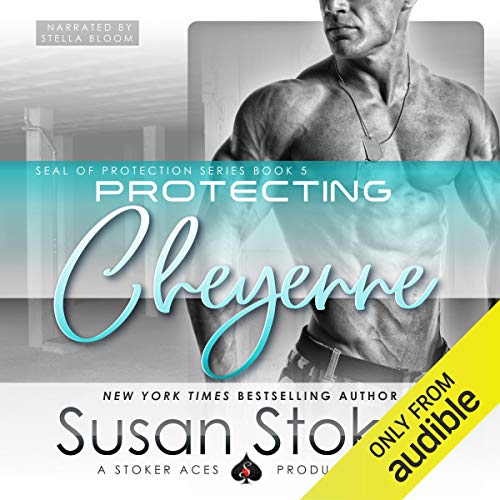 Living in Southern California, Cheyenne was used to seeing hot military men as she went about her daily business. An anonymous encounter at the grocery store cemented her crush on one such man. He was big, built, and incredibly easy on the eyes, but it wasn't as if he would ever really notice her.

Always in control of any situation, Faulkner "Dude" Cooper knows explosives. As a bomb expert, he's lived through many high pressure situations. Disfigured by a bomb while on a mission, he's used to being looked at with pity. When he's called to a local supermarket to assist the local PD, the last thing he expects to find is a generous act of kindness performed by a beautiful, amazing woman. Enchanted by her selflessness in the face of danger and intrigued by her actions to save civilians she didn't know, Dude's hooked.

Dude was able to save Cheyenne from the group of thugs trying to take her life, but when the past comes back to haunt them both, sometimes having the knowledge and the desire isn't enough to beat the countdown of the clock.

Protecting Cheyenne is the fifth book in the SEAL of Protection Series. It can be listened to as a stand-alone, but it's recommended you hear the books in order to get maximum enjoyment out of the series.

What listeners say about Protecting Cheyenne

If you could sum up Protecting Cheyenne in three words, what would they be?

It really kept me listening. I had a little trouble with the bad guys - they weren't put together but that helped the rescue scene. The whole rescue scene had me holding my breath.

I am usually not keen on submissive/master type romance. That doesn't mean that I didn't like the story - there has to be differences because otherwise there would only be one story. This was only a minor submissive/master - not anything too hard core.

All the women in these stories are so insecure, wonder how real Seals feel about that portrail.

I'm enjoying the series, these guys are good alpha protectors. I do think "Dude" was a little over the top controlling. The must be home by this time and so on was a little annoying. Other than that he was a great guy.

I just wanna say to all of the people that answer 911 calls THANK YOU FOR ALL THAT YOU DO, YOU TRUELY DON"T KNOW HOW IMPORTANT YOU REALLY ARE!!!
Chey is a 911 operator, she doesn't really know how important she is. Chey liked a men in uniform. Not just because she lived close to a military base, but that didn't hurt either. One day in the grocery Chey seen Faulkner " Dude Cooper. Chey had follow he around the store one day that they both go to for food. Dude even gotten something off the top shelf for her. Dude is a SEAL and is a bomb tech. One day on Chey's day off she went to the grocery store to get her some food the next couple of weeks. There was only a few people in the store that day. When 5 guys came in to rob the pharmacy, but they had no luck with that. The manger and the cashiers were able to get out, but the 3 women that were in store wasn't so lucky. The robbery's had asked the ladies about who wanted to do a job for them. The women had to choice which one of them that got to do the job. That's when they found out that the job was to carry a bomb. Two of the women were saying that they had family's and they didn't want to died. So, Chey said that she would do it. Wolf got the call that the police needed Dude to disarm the bomb. While the guys where leading Chey to the back to get the bomb and she started a fuss and that let the other 2 women to get a way. Once the snipers killed all 5 of the robbers, Dude and the police went into store to see if they could disarm the bomb. Dude was able to disarm the bomb and saved Chey's life. Their story only gets better from there.

This is such a action packed story and it is such an AMAZING story. Can't wait to see what happens next.

Wow, so I didn’t know Dude was so controlling... hot!

I loved how Cheyenne and Dude met. Cheyenne had a bomb strapped to her and Dude defused it. But even though the bomb didn’t go off, their chemistry was explosive. Ok that was so corny. But these books have a bit of corny in all of them.

My favorite parts of this book was when Cheyenne was on painkillers and she just said whatever came to mind. She was cute and funny.

Really enjoyed the story of Cheyenne, the 911 operator. Her family sucked. The fact that Dude was a bomb tech was fascinating. Wonderful HEA! Good to catch up with the other couples. Stella Bloom is a fabulous narrator.

I can’t tell you how many times I’ve both read and listened to this book, and all the others in the series. I know there are a lot of military books out there, especially Navy Seals, but they’re all poor imitations of Ms. Stoker’s heroes. And let’s not leave out the strong, capable women they save and love. Because the heroins always save their men right back. Nonstop action, amazing dialogue, plot lines that perfectly mesh reality with excitement and romance. Each is a stand alone, though I admit I read them in order. And this review would not be complete without mentioning the wonderful narration of Stella Bloom.

Entertaining and cute - I’m loving the entire saga. 911 operators are unsung heroes. Dude is dominance personified. Kinda upset with the way Cheyenne was written. Whiney women are not ok. My goodness can these women catch a break.

This is far and away the worst story of the series. I’m hoping the stories of Benny and Tex will be top shelf.

I thoroughly enjoyed Dude, Falconer and Cheyenne's story. After reading some of the reviews; I was skeptical about it but went ahead. I'm glad I did. Some of the reviews had some merits in that there is a predictability to the stories and seem to follow a sort of formula to each story. For me right now, even knowing that, it is entertaining.

There are certain aspects I don't appreciate; the emphasis on drinking, getting drunk, and the girls night in or out. I would think they are old enough to not need to get drunk to have fun but I over look all that to the characters. The characters are strong and love intensely.

Stella Bloom did a great job portraying the characters and narration was top notch.

These women know how to hook their heroes

I’m loving these characters. Every time we meet a new leading lady I fall for her strength and attitude! Susan has really captured the essence of these women. With an action packed storyline and brilliant characters you will love it. Yet another great performance from Stella.


Being the bomb specialist of the group it comes as no real surprise when he is asked to assist in possible bomb threat during an armed hold up in a local supermarket. Accustomed to the danger and dramatics of his job Dude is unfazed when he enters the store and finds one of the gunmen has strapped a bomb to a customers body. However, he is not prepared for the intense connection he immediately feels for the woman.

Cheyenne was completely lovable and had me in fits of hysterics with inability to filter her thoughts when she was on medication or when she inadvertently says what she is thinking. It provides such a nice contrast to her usual quiet and reserved side. Though she stands up to Caroline/Ice with no problems

I have a such a soft spot for this book. I can see the scene on the beach , I thought that was so wonderfully written.

I loved the interaction between Dude and Cheyenne. The D/s aspects won't work for everyone, but I felt it was well done and made sense for both of them. It would be easy to say that Cheyenne is weak, but she has a very strong sense of what's right and will do whatever she feels she has to. She does have a need to please and a lot of insecurities, which Dude is able to support and soothe. Her unfiltered reaction when she's on morphine is hilarious and made me laugh out loud. Dude is a fantasy and his tender yet controlling behaviour made me melt - although it's not something I'd ever want in RL.

I love these books, all of them. Can't wait for the next. I would recommend them all

A little too submissive for a heroine

not the best story line the 2nd least listening I liked. Alabama being the first.
when they don't have missions including their women, it's a little lame.
dude is bossier than expected and Cheyenne isn't convincing me that she likes it...except the bedroom.
one comment said it was mild BDSM ..not really. another said sex explicit..defiinatelly not and the 3rd comment was why grown up women had to get drunk...... girls night out,...what more can you say?
I like susan stoker and pushing through these till her next series.
the next I believe is domestic violence...so I gathered....I'll read on