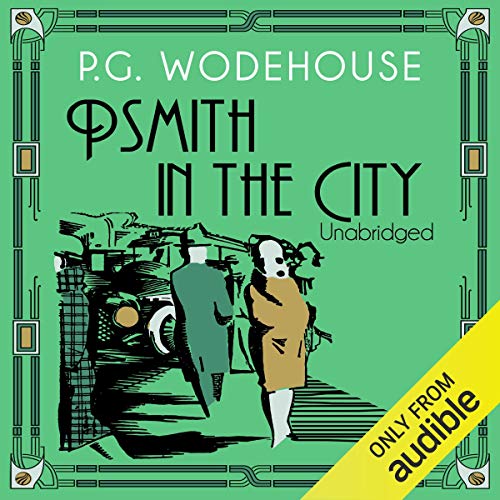 Psmith in the City

P. G. Wodehouse (1881-1975) was a beloved British humorist whose writing career spanned nearly every literary mode. His discerning wit and effortless prose gained him international praise. In his delightful series of Psmith novels, Wodehouse tracks the adventures of an adroit dandy, unfazed by even the most tumultuous situations.

The Psmith tales are classics of British comic melodrama, sending the listener through a lighthearted world with an unshakeable Psmith at the helm. In Psmith in the City, the adventure continues, following the novel's namesake and his cricket-obsessed companion Mike Jackson in their new life in finance at the New Asiatic Bank. As is expected, hilarity ensues when their passion for cricket becomes an obstacle to successful employment. In this novel we see all of Wodehouse's comic genius and mastery of farce. Wodehouse is no moralist, zealot, or philosopher - he is a humorist, and a brilliant one at that, who bring levity to a heavy world. The power of humour is here at its highest in the witty Psmith in the City.

Master of the English Prose

Wodehouse met with controversy in his life, and was often undervalued as a literary figure because his writing didn't skirt the confectionery: it planted itself firmly in the middle of it. The more I read or listen to his work the more I'm utterly bowled over by his precision, clarity, invention - and by the utter genius of his comic timing. He might not be the deepest writer, but he is the most deeply superficial one ever to trot the boards of that stickiest of wickets: English prose. And Jonathan Cecil is something like the incarnation of the Buddha of the perfect Wodehousian voice.

Psmith may be funnier than Jeeves

I'd heard some critics claim that the Psmith character is actually much funnier than the Jeeves stories, but I had a hard time believing it until I listened to this story. Psmith, like Jeeves, has an uncanny knack of manipulating the behaviour of everyone around him in order to achieve his own ends while maintaining detachment and apparent innocence.

This book doesn't have quite as many laugh-out-loud moments as some of the Jeeves and Wooster stuff (the setting of the story is the New Asiatic Bank, and Wodehouse's hatred of his first job in a bank - at the same age that Psmith is in this story - is well documented, so I'm thinking perhaps this is less farcical) but the plotting is excellent. And let's face it: I love Bertie Wooster as much as the next person (and probably more) but there is a limit to how many stories one can read about his half-baked engagements before you long for a bit of variety. Psmith in the City makes a nice change.

A wonderful afternoon with Psmith

It has been a lifetime since I have met up with Psmith and thoroughly enjoyed his company again. Astonishingly exhilarating to listen to the flowing sentences and to chuckle at the delightful turns of phrase. (Try speaking to folks in the style of Psmith and feel better for it.)

Narrator Cecil makes any book a richer experience and when combined with This author one has the best of all possible combinations.

What did you love best about Psmith in the City?

How can you not like Psmith??? It is such a checkout from reality to spend time with him.

Among the very best

Beautifully read. Among the funniest of Wodehouse's vast treasure trove. Mischief from start to finish.

One of my all time favorites, and a real classic.

What did you love best about Psmith in the City?

The suavity of Psmith and his devotion to those around him--also his socialism and rascally nature. Wodehouse always homers with the language.

Have you listened to any of Jonathan Cecil’s other performances before? How does this one compare?

Yes, I've heard many of his performances. He is always excellent.

Not my favorite Wodehouse

After listening to and loving several other Wodehouse audiobooks (including some narrated, quite well, by Jonathan Cecil), I decided to give this one, from a different series, a try.

It got off to a bad start. The beginning was all about a game of cricket, and I, an American unfamiliar with the game, was lost. It got better after that, but it never really quite clicked for me, and I found the adventures of Jackson and Psmith harder to follow and to stay interested in than those of Wooster and Jeeves.

I don't want to scare anyone away from trying Wodehouse, or Cecil's narration, but I don't think this particular title is the best example.

Johnathan Cecil is perfect for my favourite Wodehouse character. Always considered his Psmith to be his best performances, even better than his Bertie Wooster. The storyline is well up to the author's usual high standard.

The recording left something to be desired

What did you like most about Psmith in the City?

It is a good yarn with some decent funny bits.

What was one of the most memorable moments of Psmith in the City?

The hustings at which Psmith attends and interjects with carefully chosen words and causes a riot.

Indeed it did but there were quality issues with the recording that meant that it was below the usual standard from Audible.

You might if you had time. I was sufficiently engaged to take it with me in the car to listen to on the way to work.

It sounded as if the recording had been badly edited. Many phrases were cut off at the last word so you could not hear the ending of the word or phrase. This was very irritating and was a disatraction from the story.

Jonathan Cecil could narrate the phone book and I'd still find it soothing. This is essentially a collection of Mike and Psmith stories woven into a novel, much like several of the J & W books. Not as good as Leave it to Psmith in my opinion, but still brilliant comic writing.

For cricket fans only

Hard-core Wodehouse fans only and then only if they love cricket!

Has Psmith in the City put you off other books in this genre?

If this had been my first Wodehouse there would never have been any more.

Have you listened to any of Jonathan Cecil’s other performances? How does this one compare?

The performance is fine - it's the content that's rubbish.

Unless you love cricket to the point of wanting to listen to long (15 minute) descriptions of matches - no redeeming qualities for the rest of us.

If this had been my first PG Wodehose book there would never have ever been any more! It’s a series of loosely connected incidents concerned with cricket and avoiding work while employed at a bank. None of the usual imposters, mistaken identities, formidable aunts or unwanted engagements that PG Wodehouse usually delivers with such wit. The entire first fifteen minutes of this book is spent in a description of a cricket match! This is for hard-core Wodehouse fans who love cricket only – be warned!