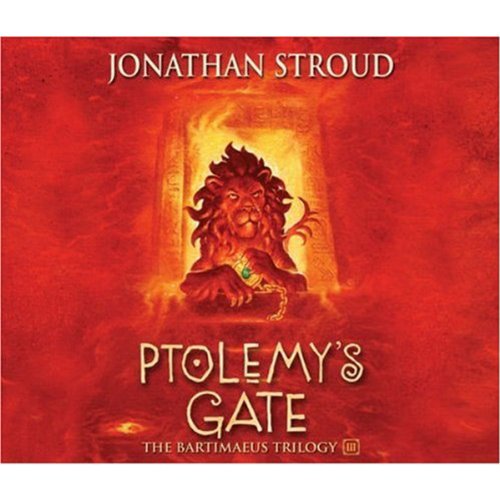 Three years on from the events in The Golem's Eye, the magicians' rule in London is teetering on a knife-edge, with strikes, riots, and general unrest. The Prime Minister is largely controlled by two advisors, one of whom is 17-year-old Nathaniel. Meanwhile, living under a false identity, Kitty has been researching djinn; she has come to believe that the only way to destroy the magicians is for an alliance of some kind between djinn and ordinary people.

Kitty seeks out Bartimaeus and embarks on a terrifying journey into the djinn's chaotic domain, The Other Place, which no human being has ever survived. But even as she does so, Makepeace engineers a dramatic coup d'etat. The outcome is a shattering of the magicians' control as all magical laws are turned upside down. Can Bartimaeus, Nathaniel, and Kitty settle old scores if they survive - and prevent the earth's destruction?

"Literate, entertaining, and exciting." ( School Library Journal)
"The trilogy wraps up with excitement, adventure and an unexpected wallop of heart and soul." ( Kirkus Reviews)

What listeners say about Ptolemy's Gate

Amazing in all regard

It is just the best in the bartimaeus series,legendary and emotional. Character development is the best i have seen. Amazing in all regards. If you dont read it, you have missed out on something in your life. Read it now.

The final part in the Bartimaeus Trilogy and how I wish there were more!
The kids love it, the parents love it.
Beautifully read and a fabulous story to boot. It is great to find a magical fantasy that bears absolutely no resemblance to Harry Potter...

This should be heard after the first two parts (The Amulet of Samarkand and The Golem's Eye) as it picks up the story where the last book leaves off. The story does stand alone but there is not much repetition and without the background from the first two books, this will be harder to follow.

the narrator is simply amazing. he captures all the characters perfectly. especially for bartimaeus. I think he has spoilt all other audio books for me as this was simply magnificent.

Simon jones could make any book sound interesting. This does not apply to this book however which does not require a fantastic narrator to spur on its merits.

An excellent trilogy, brilliantly read by Steven Pacey, full of wit, intelligent commentary and a great story.
Unfortunately, large chunks have been dropped to cut down on the overall length, meaning that many of the best, most memorable moments have been sacrificed to save time. A great disappointment.

I think this is the best series I have downloaded in 5 years plus of listening to Audible with about 600 books in my library.

I would LOVE to hear more about Bartimaeus.

Why isn't Jonathan Stroud as famous as J K Rowling? Where are the films?

MUCH MUCH better than Harry Potter in every way. I can't enthuse about this series of books enough! Don't be put off by the age of the protagonists, I'm nearly 50 and I enjoyed it a much as my 11 and 13 year olds.

I am now a total fan of Jonathan Stroud. Many more books. Please!!!

Prefer the first one over the second one.

Being the 3rd installment of the Bartemaeus trilogy it continues the tradition of well written plotlines, excellent believeable characters and amusing dialogue. I cannot possibly find anything wrong with it in any way. Oh and the reading of it is excellent as well :)

Didn't need to be abridged

Quite why the producer didn't have faith in it and gutted half the content is beyond me. About half of Bartimaeus' jokes are gone.

Steven Pacey is second to none as Bartimaeus and I thoroughly enjoyed this, but sadly because so much is missing, the books are better.

Amazing story and great audio performance. read the book quite a while back as a child and loved it now same as back then

It was really thrilling and amazingly action packed. I loved it but you must really read the previous two books to understand everything. They are both great as well.

love the book series and live the reader. very good! would definitely recommend to anyone!

I will always love these books

I first read these books when I was around 13. Shortly after I was given the CD’s (audiobook) they were very well used throughout my teenage years . I’ve now graduated to Audible versions and I must say this series still has a strong hold over me 13 years later. Thank you Jonathan Stroud !

Fantastic retelling of a fantastical series!

Loved every moment of it. Pacey has a wide range of voices, and Stroud has an immense command over his audience.

What a brilliant book!

I have absolutely loved listening to this trilogy and the last book has been fabulous. Exciting, clever and most of all really poignant. Steven Pacey reads it beautifully as always and it is overall a wonderful listen. Wish there were more!

The best book of the lot

The other two in the serious were good but this was by far the best what an ending a very fun , well right on and well performed serious

They just get better and better!

I was stunned with the ending of this one, Totally unexpected. I loved this book and the other two in the trilogy. They are really gripping and just suck you into their world. Will be on the lookout for more books from this auther. hopefully this will not be the end of bartimaeus!!

My 11 year old sons were entranced by the story and the narration. Great yarn.