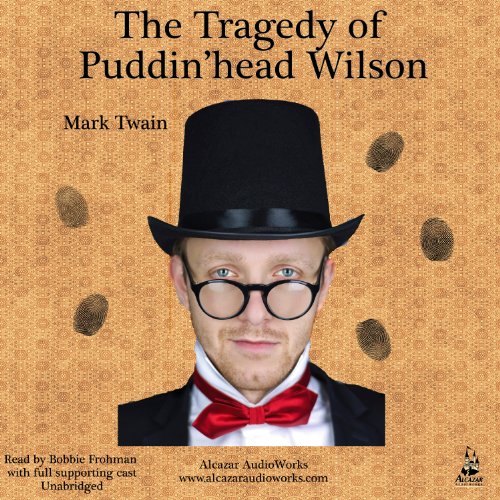 Another of Mark Twain's best-selling yarns of skullduggery and mischief. Set in the deep South, Pudd'nhead Wilson is the central character as an attorney who solves a murder mystery and lays bare the wicked deeds of a larger than life ensemble of personalities in his own wry and peculiar way.

David Wilson is called “Pudd’nhead” by the townspeople, who fail to understand his combination of wisdom and eccentricity. He redeems himself by simultaneously solving a murder mystery and a case of transposed identities.

Two children, a white boy and a mulatto, are born on the same day. Roxy, mother of the mulatto, is given charge of the children; in fear that her son will be sold, she exchanges the babies.

The mulatto, though he grows up as a white boy, turns out to be a scoundrel. He sells his mother and murders and robs his uncle. He accuses Luigi, one of a pair of twins, of the murder. Pudd’nhead, a lawyer, undertakes Luigi’s defense. On the basis of fingerprint evidence, he exposes the real murderer, and the white boy takes his rightful place.

The book implicitly condemns a society that allows slavery. It concludes with a series of witty aphorisms from Pudd’nhead’s calendar.

A Whisper to the Reader

Chapter 04 The Ways of the Changelings

Chapter 12 The Shame of Judge Driscoll

Chapter 16 Sold Down the River

Author's Note to Those Extraordinary Twins

Terrible overacting by the narrators

I love Twain, but I could not get through a full chapter of this. The narrators were very hard to follow as they thought they were channeling Scout Finch, except for the overacting. I was not allowed to visualize the story in my mind, as it took all my effort just to understand what was being read.
The book may be terrific, but I won't know now.

Would you be willing to try another one of Bobbie Frohman’s performances?

the southern accents were so drippy and wet that it was very difficult to understand what was being said.

The "dramatazation" of this book is terrible

Maybe but read it don't listen t to it.

What other book might you compare Pudd'nhead Wilson to and why?

The main narrator with a fake accent was bad enough but the dialogue was "dramatized" with fake accents that came and went in the middle of sentences.

Was Pudd'nhead Wilson worth the listening time?

It is a good story but read it or maybe try a different narrator.

We survived about 30 seconds. And I like the book. We just sat in silence for the rest of the drive.

This title has received several bad reviews about over acting. I disagree, having listened to over three hundred books I found the acting just fine. And the story very good since finger printing was not accepted at the time this book as written. Kind of reminded me of a Sherlock Holmes story with Twain humor thrown in for fun. Listen to this title and enjoy the fun.

Twain is a Master!

How can You begin to review Twain? He lived and is buried in my Hometown of Elmira, NY. He was an Amazing Master of Tongue and Cheek Humor... and yet, everything, including this, Has lessons to be learned. Extremely well written... :-)

Brilliant story. I loved how the story was told by the author and read by the reader. Great ending.

I enjoyed the story, enough to sit through and make myself get over the actors portrayals. serious over acting.

Chilling yet humorous. Twain really knows how to make a reader uncomfortable with thoughts of American history.