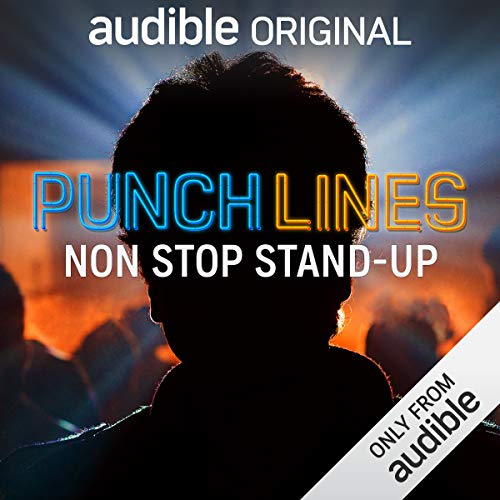 Audible records stand-up in nightclubs and festivals year-round, and hand-picks standout moments, exclusively for Members’ ears. We blend those fresh bits with selections from specials and comedy albums to deliver often hilarious mixes, released weekly. This is Punchlines – a stand-up experience unlike any other.

When you add Punchlines to your library, you unlock multitudes of exclusive stand-up comedy, and you’ll continue to receive new episodes as they are released.

Comics you’ll hear on Punchlines include

What listeners say about Punchlines

love this! waiting for more!

Love these comedy briefs. Have listened to episodes 1-30. Waiting for more, are they coming??

Do not add to your library.

After adding to my library this series has taken over my download list. Can’t delete it and it keeps downloading every time I open the app. The few episodes that did download were not funny at all. Pure garbage even for free.

This is my go-to (and free!) listen after I've made it through monthly listen I love the mix - especially how it blends big names with people I've never heard of. Thanks Audible!

I thought this was a pretty funny listen. Will keep listenining to the rest of the series.

this says optional, but clearly isnt

some are good, some are terrible, none are amazing. sometimes the sound quality is so bad you cant even here the bit. could do better...

Punchlines is definitely worth the listen. My boyfriend and I literally couldn’t stop laughing. Five stars all the way. Cannot wait to here more!

love this audioshow . it too good and best entertainment to invest in my free time

bad language not stated in description

hard to listen to because too contrived. Crude not clever. Applause back track very annoying.


Profanity in place of humor renders this unimaginative and therefore, boring. Unstylish in place of substance.

Yuck!!! Not as it was portrayed.

Yuck!!! Not as it was portrayed. It was a sure waste of my credit my time and my patience