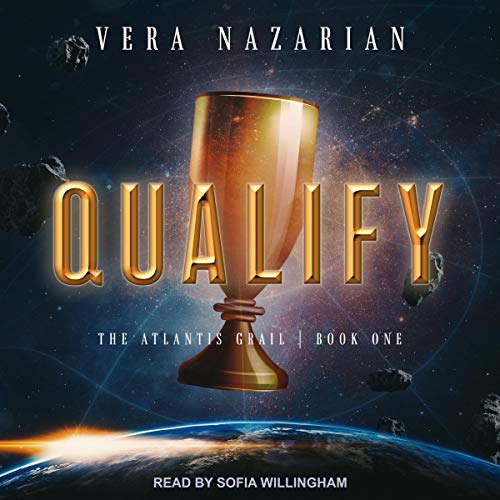 You have two options. You die, or you Qualify.

Sixteen-year-old Gwenevere Lark is determined not only to Qualify but to rescue her entire family.

If you are good enough to Qualify, you are eligible to compete in the brutal games of the Atlantis Grail, which grants all winners the laurels, high-tech luxuries, and full privileges of Atlantis citizenship. And if you are in the Top 10, then all your wildest wishes are granted...such as curing your mother's cancer.

There is only one problem. Gwen Lark is known as a klutz and a nerd. While she's a hotshot in classics, history, science, and languages, the closest she's come to sports is a backyard pool and a skateboard.

This time she is in over her head, and in for a fight of her life, against impossible odds and world-class competition - including Logan Sangre, the most amazing guy in her school, the one she's been crushing on, and who doesn't seem to know she exists.

Because every other teen on earth has the same idea.

You Qualify, or you die.

What listeners say about Qualify

It’s very flat. A main character, I find hard to believe, ever develops into a proper character... or is that why this book is 22hrs? This book clearly has an audience, i mean just look at the ratings and reviews. Their must have been an age range reference I didn’t pay attention to, bc I could see how a younger person who hasn’t read a lot of complex science fiction stories yet could possibly find this book entertaining. I just am not in that audience, that’s all!!

Victimhood,classism, socialism,multiculturalism,veganism,climate change,LGBTQ characters, really covers most of the social justice topics while simultaneously presenting the virtues of all things Marxist. Got tired of seeing this stuff on TV so I turned to books, guess there is no escape.

One of my favorite books series ever!

I love everything about the story and have read it at least a dozen times, but listening to the narration is even better! Willingham brings the whole story to life! Absolutely love it!

I wish this book had been first!

The premise of this story is not new, the YA dystopian series has been done by many. However, I wish this story had come before all the others like it. This should’ve been the book that started the fandom because it really hooks you. Gwen Lark is a great heroine. She has great personality, realistic flaws and true heart. Her growth is believable and not too over the top. There is so much in this book but I don’t feel like it drags or has unneeded filler. I was riveted the whole way through. I’m still reeling from the end of the book and I’m starting book two immediately. The narrator was also amazing. She did a great job with pacing, different character deliveries and accents. Her emotion was well done and had me really engaged. The story premise itself was also very clever and unique. I thought the author did a very cool take in a genre that’s been done again and again. I loved this book. I’ll admit I’m a huge sucker for the dystopian genre so, I knew I would probably enjoy this book. However, I am more than pleasantly surprised by how much this book really got to me. I’m ranking Qualify as one of my favorites.

I read this book several years ago and was excited to see it in an audiobook! I was not disappointed with the result! The story of Earth in the trajectory of a planet killing asteroid and the descendants of Atlantis who return to save 10 million of Earth’s children is riveting. The main characters are 4 siblings from Vermont who enter the qualifying lottery to be one of the refugees. What they didn’t expect is that to be able to be on one of the rescue ships, they must train and then try to avoid death in different scenarios. The person who speaks in the book is the second oldest of the siblings, Gwen. I don’t want to give away any of the plot, but this audiobook is well worth the credit to purchase! The choice of narrator is perfect also! Am getting ready to listen to the second in series, Compete.

I've been waiting for this series to come out on audible for years and it has not disappointed! Gwen is a very likable, naive and sometimes frustrating protagonist, but lots of character growth throughout the book that leaves you wanting more! I'm excited to continue along with Gwen Lark and her journey through the stars.

I know people compare this to The Hunger Games, and I can understand why. It's a Y/A novel about a competition in a dystopian or apocalyptic world. But honestly, I found this to be so much more entertaining than The Hunger Games. This would be awesome as a TV series!

First audio book. Can’t sit down and listen to an audio book but I Realized I can listen to it during the day while cleaning or painting. Can’t wait for the whole series to be on audible. Qualify is awesome. Can’t count how many times I’ve read this book and the whole TAG Series. I have never reread any books so many times. The most awesome series I have ever read. Have them on kindle ebooks, hard back editions with Vera Nazarian’s autograph and now the one audible. This woman has created a whole new world down to the smallest detail. Now we can listen to it on audible and it is wonderful!

Even better in Audiobook!!

I am in awe! I LOVE this book series and I didn’t think it could get any better until I listened to it! Hearing the names pronounced actually helped so much and I was at the edge of my seat listening even thought I’ve read this book a few times already! I am soo excited and CANNOT wait for the next to hit Audio!! I am praying it is going to come out soon!!

I've read all currently released books in this series and I'm now listening to them in anticipation of the release of book 4! I absolutely love Vera's story and writing style! I think the narrator did an amazing job and i could not stop listening! Thank you Vera Nazarian you are my favorite!

The tech. Ace.
Brutal storyline.... Yes. And clever twists.
Apart from so much superficiality about people I nearly puked!
Hope there is way less of that in the next book. ..like none. Will still be listening to next because the story is interesting still.

Meets si-fi magic. I loved the story-line, the depth of thought that has clearly gone into the whole performance is awe inspiring - thinking up voices that command ships as a ting I really enjoyed. My only complaint is there are only 3 books so far, where as Vera has loads in another series. This series is my favourite, and I hope more books get written, because the story is titillating - I'm definitely left wanting more.

Huge fan of this series

Been waiting for this since it was announced back in the summer. Thought Sofia Willingham is an excellent choice as narrator- can’t wait for the next book in the series to also be brought to life.

Wonderful - Hurry up with the next book!!

Loved reading this series and being able to hear it has brought it to life! Can't wait for the rest of the series to be in audiobook format!

Absolutely brilliant. I could not put down the hunger games books but this was next level good! You will be hooked on the entire series and they even get better as they go on.