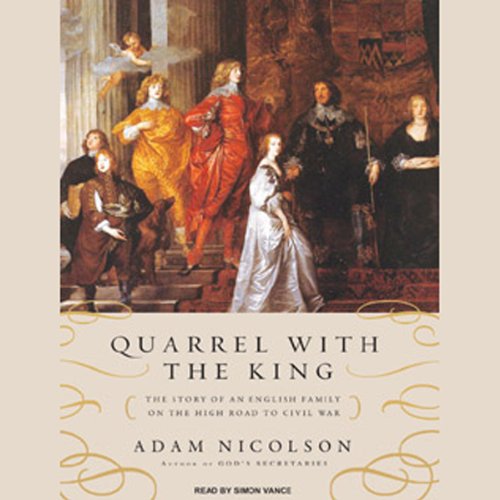 Quarrel with the King

The Story of an English Family on the High Road to Civil War
Written by: Adam Nicolson
Narrated by: Simon Vance
Length: 8 hrs and 58 mins
Categories: History, Europe

Spanning England's most turbulent and dramatic decades---from the 1520s to the 1640s--- Quarrel with the King tells the story of four generations of one of the greatest families in English history, the Pembrokes, and follows their glamorous trajectory across 130 years of change, ambition, resistance, and war.

As he tells their story, Adam Nicolson reveals how a struggle for dominance began as the English crown slowly grew in strength and power, which evoked questions of loyalty that would simmer for decades. Was government about agreement and respect or authority and compulsion? What status did traditional rights have in a changing world? Did a national emergency mean those rights could be ignored or overturned? These were the questions that, in 1642, would lead to a brutal civil war, the bloodiest conflict England has ever suffered, in which the Earl of Pembroke---a devout subject---had no choice but to rebel against a king he believed had betrayed him and his country.

The Rise and Fall of the Pembrokes

While Nicolson's well-researched history focuses on the Pembroke family, his true subject is the shifting English power politics and economic base in the sixteenth and seventeenth centuries. The Earls of Pembroke are the perfect representation of the rapidly changing social and political structures at court and in the countryside. The first earl was a 'made man' from Wales who rose through the ranks on the merits of his rather shady talents (he was both a spy and a murderer), and once he arrived, he sought to legitimize his title and his legacy by tying his allegiance to the old manorial system--a system that was already beginning to crumble as the country shifted from a land-based to a money-based economy, and as the London became increasingly centralized. Much of Nicolson's study focuses on the third earl, William Herbert, who perhaps most successfully straddled the fences between two worlds and two eras, working to extend the pastoral ideal of his uncle, Sir Philip Sidney, into the heart of the Jacobean court itself. But the Pembrokes fared less well under Charles I, who so firmly believed in the divine right of kings that he ignored the old chains of reciprocity between king and lords, lords and tenants. Treating the rest of the country as if its sole purpose was to provide the luxuries of an isolated, effete court and cannon fodder for ill-conceived wars was an attitude that disturbed the third earl--and one that eventually led to the outbreak of civil war, the dissolution of the monarchy, and the loss of Charles's head. The family fortunes fell under Oliver Cromwell's Commonwealth, and by the time the monarchy was restored, both it and the ideals of the Pembrokes had drastically changed forever--as had England itself. Nicolson's afterward points out how the gap between rich and poor expanded drastically in the 18th century, affecting in particular those who lived in the outlying counties, where farmers who were once self-sufficient, able to feed and clothe their own families from the direct results of their own labor, were now forced to focus on producing goods for sale and rarely earned enough coins to sustain them.

I found this approach to be an interesting and clever way to address familiar issues in a new way, one that put a more human face on them. Nicolson includes descriptions of well-known portraits of the Pembrokes by VanDyke, Lely, and other famous painters, includes quotes from letters and literature of the day, and provides just enough personal anecdotes about the family and members of their circle to keep the narrative engaging. I do wonder, however, if those less familiar with this period in history and the many persons mentioned in the book might be a bit overwhelmed. While it is indeed an interesting look at history, I wouldn't recommend it as an introduction to English court politics.

An interesting account of the lives of the Herveys

This book is an interesting account of the lives of the Herberts, from their rise to the Earldom of Pembroke under Henry VIII until the eve of the English Civil War. Through the Herberts' marriages the book also covers the careers of many historical characters, such as Lady Jane Gray, Sir Philip and Mary Sydney. The context is also well documented through regular references to contemporary social conditions in the English countryside as well as the machinations at court. Simon Vance's excellent reading brings the book out of the realm of the historical texbook and makes it all the more interesting.

Adam Nicolson writes with great finesse, weaving much research into a fine tapestry which describes England in the decades leading up to the Civil War in 1642, essentially the reigns of James I and Charles I. This is a charming book full of descriptions which ripple through the imagination just like the chalk streams which run through the great Wiltshire estate of the Earls of Pembroke. There is much history here too, such as the role of Villiers, Duke of Buckingham, in catalysing the downfall of the Stuart monarchy. On the other hand the threads holding the narrative together can seem a bit whimsical and repetitive. And some of the descriptive passages, notably of Wilton house itself could have come straight out of a National Trust guide book or go straight into one. Nevertheless, this is an imaginative and highly literary account of times past. And thanks to Simon Vance's excellent reading, a pleasure to listen to.

Rather overblown narration for non-fiction

I would change the narrator.

What was one of the most memorable moments of Quarrel with the King?

His tone was far too flowery. You would think he was reciting Shakespeare.

Did Quarrel with the King inspire you to do anything?

Read rather than listen to the book. Happily I own hard copy.

I really like some of Adam Nicholson's work but this version was seriously spoilt because the narrator appeared to be in love with the sound of his own voice.