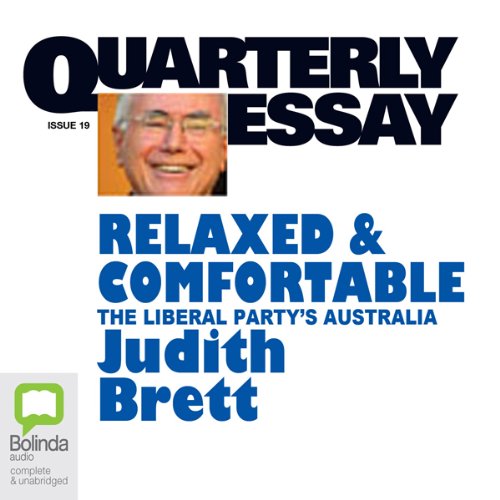 What is the Liberal Party's core appeal to Australian voters? Has John Howard made a dramatic break with the past, or has he ingeniously modernised the strategies of his party's founder, Sir Robert Menzies?

For Judith Brett, the government of John Howard has done what successful Liberal governments have always done: it has made its stand firmly at the centre and presented itself as the true guardian of the national interest. In doing this, John Howard has taken over the national traditions of the Australian Legend that Labor once considered its own.

Brett offers a lucid short history of the Liberals as well as an original account of the Prime Minister, arguing that, above all, he is a man obsessed with the fight against Labor. She explores both his inventiveness in practising the politics of unity and his great ruthlessness in practising the politics of division. She incorporates fascinating interview material with Liberal voters, shedding light on some of the different ways in which the Liberals appeal as the natural party of government.

What listeners say about Quarterly Essay 19