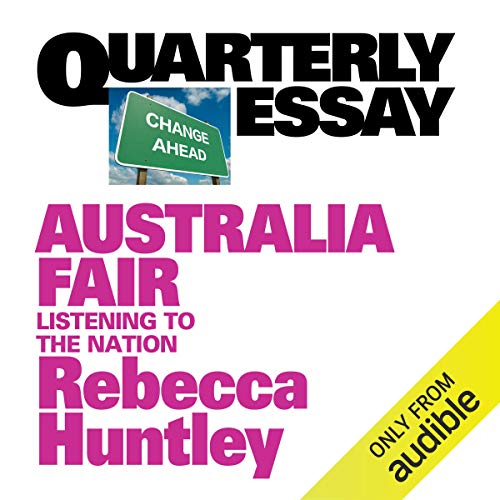 What do Australians want most from their next government?

In this vivid, grounded, surprising essay, Rebecca Huntley listens to the people and hears a call for change.

Too often we focus on the angry, reactionary minority. But, Huntley shows, there is also a large progressive centre. For some time, a clear majority have been saying they want action - on climate and energy, on housing and inequality, on corporate donations and the corruption of democracy.

Would a Shorten Labor government rise to this challenge? What can be learnt from the failures of past governments? Was marriage equality just the beginning? In Australia Fair, Rebecca Huntley reveals the state of the nation and makes the case for democratic renewal - should the next government heed the call.

Fab catalogue of Australians views evidenced by research to inform future policy directions and giving us hope. Full of lots of insights. Highly recommended to anyone interested in politics and future of our country and policy makers.

It's not Rebecca Huntley's fault things turned out so incredibly different from the way she called them. Still, the way events have played out could not have done more to repudiate the main thrust of her argument. Pity is cruel, and laughter is guilty, but I am afraid this essay found me indulging in both.

biggest waste of money,this is my only dislike

biggest waste of money,this is the only book ive disliked in my life,but still stuck it out to the end incase my mind changed

Rebecca raises the important issues facing Australians prior to their general election in 2019 - they are presented concisely and in a reasonably balanced manner.