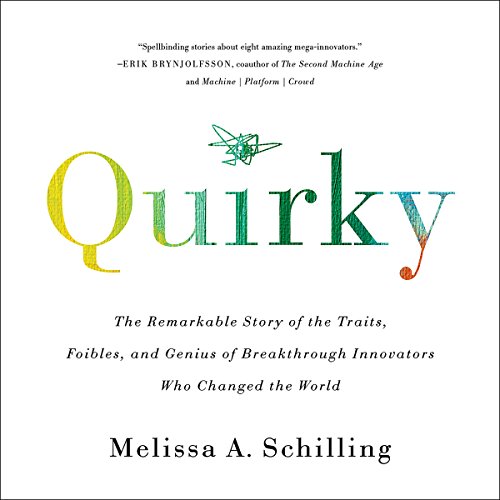 What really distinguishes the people who literally change the world - those creative geniuses who give us one breakthrough after another? What differentiates Marie Curie or Elon Musk from the merely creative, the many one-hit wonders among us?

Melissa Schilling, one of the world's leading experts on innovation, invites us into the lives of eight people - Albert Einstein, Benjamin Franklin, Elon Musk, Dean Kamen, Nikola Tesla, Marie Curie, Thomas Edison, and Steve Jobs - to identify the traits and experiences that drove them to make spectacular breakthroughs, over and over again. While all innovators possess incredible intellect, intellect alone, she shows, does not create a breakthrough innovator. It was their personal, social, and emotional quirkiness that enabled true genius to break through - not just once but again and again.

Nearly all of the innovators, for example, exhibited high levels of social detachment that enabled them to break with norms, an almost maniacal faith in their ability to overcome obstacles, and a passionate idealism that pushed them to work with intensity even in the face of criticism or failure. While these individual traits would be unlikely to work in isolation - being unconventional without having high levels of confidence, effort, and goal directedness might, for example, result in rebellious behavior that does not lead to meaningful outcomes - together they can fuel both the ability and drive to pursue what others deem impossible.

Schilling shares the science behind the convergence of traits that increases the likelihood of success. And, as Schilling also reveals, there is much to learn about nurturing breakthrough innovation in our own lives - in, for example, the way we run organizations, manage people, and even how we raise our children.

"An exceptionally rewarding marriage of biography and social science that will change the way you think about winners and winning." (Ron Adner, Tuck School of Business, Dartmouth College, author of The Wide Lens)

"A captivating read with inspirational biographies and valuable lessons to help light that innovative flame." (Daniel Levinthal, The Wharton School, University of Pennsylvania)

"The real paradox of Schilling's work is that even though it looks at completely extraordinary people, it may be most valuable for what it tells us about how organizations can harness the innovative power of ordinary people." (Strategy + Business)

What listeners say about Quirky

cool but a long winded synopsis...

It's an alright book but it's a long winded synopsis of many other books. The ideas are presented as a sort of meta-study but there is little direction towards an original hypothesis. Ideas that are presented are not in such a way that a reader would gain much from them in their own lives. It's more of a 'mater of fact' book rather than anything approachable. Anyone looking for actual leadership/innovation research should maybe just go directly to the books used to write this book. At least for me, books such as the one of Jobs or Tesla were more insightful than this one aggregate book

I enjoyed listening to this audiobook

Most fascinating and important book to date!

This book is the first window into exactly what builds the future and brings it into today. Every educator, parent, and supervisor should read this book!

Great subject matter and worth listening to.

Great subject matter and worth listening to, but author is a bit repetitive and seems to wander randomly sometimes.

Where does Quirky rank among all the audiobooks you’ve listened to so far?

That's hard to answer, I think I like all the books I have downloaded, but then I check reviews oftentimes before an actual purchase.

The author's research was clear and interesting

Only criticism was when she mentioned that the individual attended "gymnasium" for school, the pronunciation is not "gym" as in a sports facility, but a hard 'g' as in the German pronunciation. It was humorous if you speck German.

That's not my habit. I go for my audio-books because I would rather not listen to all the commercials on the radio, so I look forward to 'even' a drive across town for listening.