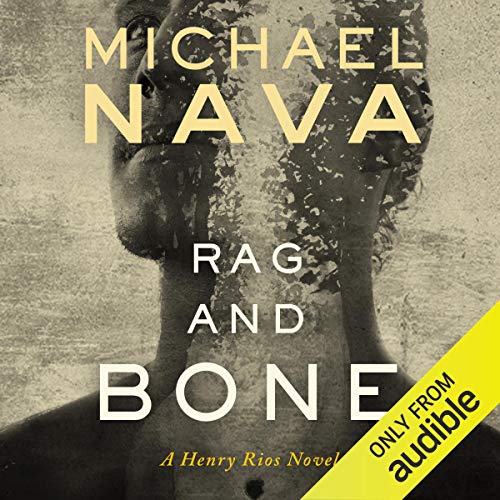 While recovering from a heart attack, gay Mexican-American attorney Henry Rios comes to the aid of his long-lost niece, the illegitimate daughter of his estranged sister, who has confessed to the murder of her abusive husband, but during his investigation, Rios discovers that things are more complicated than he had thought.

What listeners say about Rag and Bone

Sad for it to end

Not very many series keep my attention eight books in, but this one certainly did. Henry Rios is an amazing character. Thus book was top notch with great supporting characters and an intriguing mystery. Oh, and-finally-a love interest for Henry. Once again excellent narration.

Wonderful in every way

When we catch up with Henry again, and very possibly the last time, he is in court defending a man from the three strikes law. Only he suffers a heart attack in the middle of the courtroom. It could be a blessing in disguise as it not only brings him and his sister Elena together again, both determined to mend fences and become part of each other’s lives. He also meets someone new; John. A man he has chemistry with from the start and someone who encourages him and supports him. They fit together. As always there were obstacles, but not insurmountable ones and not ones that caused drama, something I’m very grateful for.

Rag and Bone is different in many ways from the other books, it’s focused on family, past and present, and not just any family, but Henry's. It's about making amends and moving forward. But it’s not only Henry and Elena - Vicky the daughter Elena put up for adoption many years comes into their lives. She comes with her young son and a whole lot of trouble in tow. She claims that she and Angel are running from her abusive husband newly released from jail for abusing her. However there are parts of her story that doesn’t add up, and when she’s charged with the murder of said husband it falls on Henry to defend her.

This book was like a balm on our scarred and mangled hearts compared to the others in the series. We finally see some happiness for Henry. Genuine happiness, hope and seeing him settling down some. I know I said in my last review that a happy Henry wouldn’t fit with the rest of the series. But it does. It’s hard won and well earned. Don’t get me wrong, this is still not a fluffy romance, but hope and (positive) possibilities shines through everything. But this series wouldn’t be what it was without some major case, some injustice for Henry to fix. And this time it's his own family that needs fixing. I loved him with Angel, this brave little boy broke my heart with all that he’d experienced in his short life, never expecting anything or barely taking up any space. I just fell for him - hard. From having had no one but himself – and the occasional lover, Henry finally has a family. A family that requires a lot of work, but a family he’s willing to fight for.

Thom Rivera has been the perfect choice of narrator for this series. He understands the characters, the place and time. Now I don’t know anything about him, but from his narration alone, I’m guessing he shares some commonalities with Henry (and Nava) in having at least a mixed heritage. The way he portrays the off-hand comment, the slurs and the off look really shows it’s something he’s all too familiar with. Then there is the way he handles the Spanish words and names. They are genuine Spanish, no Spanglish near it, it’s also effortless and clearly something he’s comfortable with. He even did a credible Aussie accent, which was a nice surprise for me. Anyway, it’s these seemingly small things that really set the tone of a book and makes it more genuine and authentic. It’s why, even if a book is so so (not that it’s the case here), you’d still come back to it, just to listen to Rivera.

I don’t know if this is the end of Henry’s journey, in a way it could be. He’s starting a new chapter in his life and one I think he’ll be very happy with, but I still have hope that I’ll experience more works by Nava and Rivera, because this duo knows what they are doing.

Exceptional story and storytelling. I’ve loved the series and particularly the narration that has so authentically bought it to life!