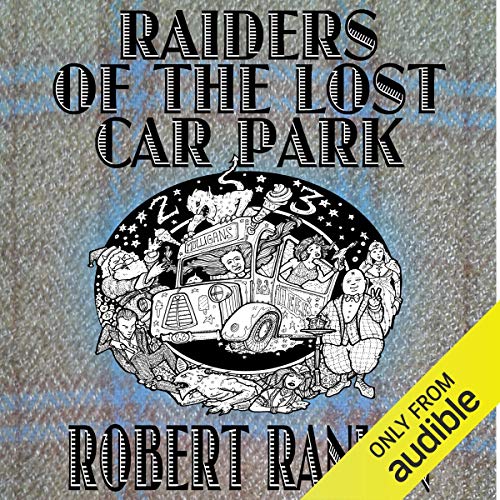 Part two of the three-part Epic Adventure - featuring a lost car park, the Hidden King of the World and more conspiracies than you can shake a stout stick at.

Cornelius Murphy, big-haired tall boy and Stuff of Epics, has a plan. That with the aid of a reinvented ocarina, he and his best friend Tuppe enter London’s Forbidden Zones (areas cunningly hidden from us through the A-Z street directory and a conspiracy of black cab drivers) and liberate the countless billions of pounds worth of booty that lies therein. And while doing so, rescue Hugo Rune, self-styled Most Amazing Man Who Ever Lived, guru to gurus and father to Cornelius Murphy.

Hugo Rune has plans of his own. Overthrow the Dark Forces within the Forbidden Zones, a lost race of fairy folk, ruled over by an evil king, whose identity will come as some surprise. And kidnap Her Majesty the Queen (God bless her) during a performance of the world’s greatest rock band, Gandhi’s Hairdryer. Inspectre Hovis of Scotland Yard has a most definite plan: arrest Hugo Rune for his crimes against Chinese noodle parlours and a list of offences far too long to list.

“Stark raving genius...alarming and deformed brilliance” ( Observer)
“He becomes funnier the more you read him.” ( Independent)
“Everybody should read at least one Robert Rankin in their life.” ( Daily Express)
“One of the rare guys who can always make me laugh” (Terry Pratchett)
“To the top-selling ranks of humorists such as Douglas Adams and Terry Pratchett, let us welcome Mr Rankin” (Tom Hutchinson, The Times)

What listeners say about Raiders of the Lost Car Park

loved it, was great to have the talented Mr Robert Rankin read his own work

hugely entertaining, if you haven't already read/heard the fist book in the trilogy (the book of ultimate truths), definitely go and do that first.

nobody but the author could do justice to Robert Rankin's psychedelic sci-fi, the reading is (as you would expect!) spot-on.

if you're a fan of Terry Pratchett or Douglas Adams, you'll love this, highly recommend!

one of the least enjoyable Rankin books

good narration but felt like a story being told to a 5 year old with the inflections and repetitions.
No where near the story content expected from Rankin. Very disappointed overall.

Rankin should not read his own works

Robert just hasn't quite got the voice for reading his own works,others seem to do a much better job.
the stories themselves are very good,but this one I struggled with keeping interested in,mainly because of his reading..

I enjoyed the first in this series, The Book of Ultimate Truths, and I like Robert Rankins narration so I happily bought the Raiders of the Lost Car Park. I'm now about half way through and I'm a bit disappointed. I'm finding the story line is worked a bit too hard and there have been at least three glitches in the narration, including one which included the 'f' word when the narrator got fluffed the line. Generally okay and I will finish the series as I hate not getting to the end, but I hope the post production work improves.