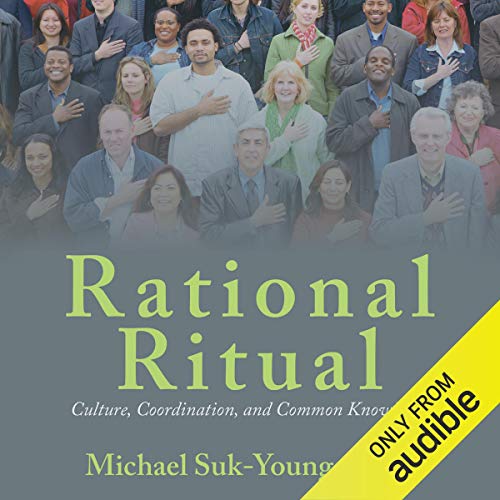 Why do Internet, financial service, and beer commercials dominate Super Bowl advertising? How do political ceremonies establish authority? Why does repetition characterize anthems and ritual speech? Why were circular forms favored for public festivals during the French Revolution? This book answers these questions using a single concept: common knowledge. Game theory shows that in order to coordinate its actions, a group of people must form "common knowledge". Each person wants to participate only if others also participate. Members must have knowledge of each other, knowledge of that knowledge, knowledge of the knowledge of that knowledge, and so on. Michael Chwe applies this insight with striking erudition to analyze a range of rituals across history and cultures. He shows that public ceremonies are powerful not simply because they transmit meaning from a central source to each audience member but because they let audience members know what other members know. For instance people watching the Super Bowl know that many others are seeing precisely what they see and that those people know in turn that many others are also watching. This creates common knowledge, and advertisers selling products that depend on consensus are willing to pay large sums to gain access to it. Remarkably, a great variety of rituals and ceremonies, such as formal inaugurations, work in much the same way. By using a rational-choice argument to explain diverse cultural practices, Chwe argues for a close reciprocal relationship between the perspectives of rationality and culture. He illustrates how game theory can be applied to an unexpectedly broad spectrum of problems while showing in an admirably clear way what game theory might hold for scholars in the social sciences and humanities who are not yet acquainted with it. In a new afterword, Chwe delves into new applications of common knowledge both in the real world and in experiments and considers how generating common knowledge has become easier in the digital age.

What listeners say about Rational Ritual

The book references illustrated visuals (graphs, charts etc) These aren't provided in the audiobook. This makes the narrative difficult to follow.

Good. A little repetitive about "common knowledge", but effective to understand what makes the people take desitions

Difficult given that you need to see diagrams

struggled but excellent concepts which has added value to my working day. please work on a solution to work diagrams into audible better

The performance is too fast and sounds unnatural at 75% speed. The start of the book is a little dry too, but gets better as you stick with it.

The information presented is good for those wanting to learn how to create common knowledge and culture within an organization. However, the narration sounds like it was read by a computerized voice, not a person.

The narrative is really confused. It looks like the author wanted to write a book about marketing but wanted a sexy title that has nothing to do with the core of the argument-which in itself is not very powerful. In addition, the narrator sounds like a robot who is just learning to use human language.

Repetitive book as it's about one single concept

The concept of Rational Ritual is a very interesting one and actually helps understand certain situation - this book is useful in the sense that it makes the reader aware about the phenomenon.
The problem with this book is that it is very very repetitive and the same content/sentence are coming back all the time.

Was Rational Ritual worth the listening time?

It's a bit long for the content - it could have been way richer for the same time, adding insight from other sociological studies for instance.