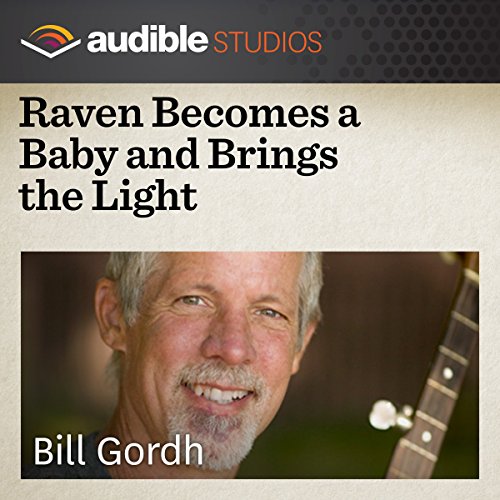 Raven Becomes a Baby and Brings the Light

Raven can be either a bird or a man. As a man, he can pull down his pointed hat onto his face, and he transforms into Raven bird. The world is dark.

The sun and moon and stars were taken by an evil wizard, and he kept them locked up in his big house on the hill. Raven says that he will bring them back. He flies to the house, but he cannot get in. He decides to play a trick. He pecks on the front door and then flies off and hides behind a tree. The wizard unlocks and opens the door, but there is no one there. He slams the door and locks it. Raven repeats this trick many times until the wizard stays out looking for the one who keeps knocking.

When the wizard's back is turned, Raven flies inside. He looks around. He sees the sun in a bag hanging on one of the walls. On another wall a bag with the moon is hung and on a third wall, a bag full of stars. Just then, the wizard comes back in. Raven must hide. There is a glass of milk on the table, and Raven becomes a seed and drops into the milk. The wizard locks the door. The wizard's daughter comes into the room and drinks the glass of milk.

Time flies by and a baby is growing inside the wizard's daughter. Soon, she has a baby, but it has a strange little hat on its head. One day when the wizard grandpa is napping, the baby starts screaming for the "Bally". The mother tells him to quiet down. Grandpa Wizard asks what the baby is crying about, and his daughter tells him that the baby wants to play with the sun ball. The grandpa says to let it play. The mother takes the bag down and rolls out the sun. The baby plays with it. When her back is turned, the baby pulls down his hat and becomes Raven. He throws the sun ball up through the smoke hole. The villagers cheer, "The Sun is back!" The same is done with the moon and stars. Then the Grandpa Wizard gets out of bed and sees what has happened. He looks at the baby.

my daughter and I are enjoying Bill'sstories so much. they are just so very lovely and it's nice to see old folk stories being revived in this way.