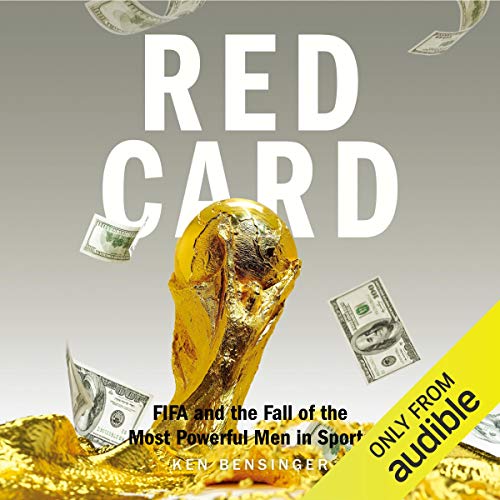 FIFA and the Fall of the Most Powerful Men in Sports
Written by: Ken Bensinger
Narrated by: Mike Capozzola
Length: 10 hrs and 31 mins
Categories: Sports & Outdoors, Football

The story of FIFA's fall from grace has it all: power, betrayal, revenge, sports stars, hustlers, corruption, sex and phenomenal quantities of money, all set against exotic locales stretching from Caribbean beaches to the formal staterooms of the Kremlin and the sun-blasted streets of Doha, Qatar.

In Red Card, investigative journalist Ken Bensinger takes a journey to FIFA's dark heart. He introduces the flamboyant villains of the piece - the FIFA kingpins who flaunted their wealth in private jets and New York's grandest skyscrapers - and the dogged team of American FBI and IRS agents, headed by attorney general Loretta Lynch, who finally brought them to book.

Providing fresh insights on a scandal which has gripped the world, he shows how greed and arrogance brought down the most powerful institution in sporting history. A wild, gritty, gripping, and at times blackly comic story, Red Card combines world-class journalism with the pace of a thriller.

Red Card (filmed as Houses of Deceit) will be a major film, produced by Pearl Street Films, the production company owned by Matt Damon and Ben Affleck.

Very readable expose of the corruption within FIFA. Good storytelling covering a wide range of characters

Awful narration of a very interesting but complicated subject. He never paused his narration even when the subject matter changed. It ruined my enjoyment.