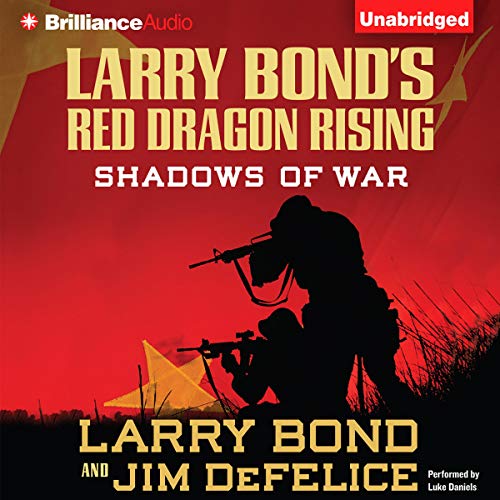 In the not-too-distant future, massive climate change has wracked the globe. China's rice-growing regions have been devastated by typhoons, while its western breadbasket is suffering from three years of drought. Riots threaten to tear the country apart. With the old-guard Chinese government paralyzed by the crisis, a young, charismatic party leader steps to the fore. His solution to the unrest is a time-tested one - conquest of China's neighbors...and after that, the world.

Josh MacArthur, a mild-mannered American scientist studying climate change in northern Vietnam, is the only witness to a clever attempt by the Chinese to make it appear that Vietnam started the war. Escaping a massacre, he manages to gather critical evidence that could turn world opinion against China.

Unfortunately, the Chinese learn of MacArthur's survival and of the information he carries. A former Ch'an fighting monk turned commando is sent to capture him. Mara Duncan, a CIA agent, is also on MacArthur's trail. The American scientist has become the subject of a deadly race in the jungles of northern Vietnam, with the fate of the world in his hands.
©2009 Larry Bond and Jim DeFelice (P)2009 Brilliance Audio, Inc.

China vs Nam with an assist from USA. Narration was annoying, story is soft and weak. Action is predictable and to nice. Add some global war politics. Record it and sell on Audible.
I suggest you pass on this book. I did finish the entire book so it’s not unreadable. But I would not buy again.

I love Luke Daniels, usually. but this doesn't hardly sound like him! a good quarter of the audio books I've got, are narrated by his voice, but this performance really doesn't sound like him at all.

Once you get pass the premise, it's a good book.

The general plot was great, and mostly what I expect from the authors. It's a good story about how and why a war is fought, and the details of what actually happens. That much I enjoyed and is why I purchased the book.

Would you recommend Red Dragon Rising to your friends? Why or why not?

I don't have many friends into these kinds of books, and those who are, I would recommend other series well before this one. Perhaps, like me, if you already gone through all of Clancy, et al of the 80's/90s, more recently Brad Thor, and other Larry Bond stuff; then this is a good series.

Which character – as performed by Luke Daniels – was your favorite?

I think both Mara and Josh were performed well. But the portrayal of the SEALs nearly took me out of the story. To be fair, the material Daniels had was as bad as the portrayal. It's very hard to believe Larry Bond wrote both about the SEALs in this book and Exit Plan. Did Jim cover them in this?

Did Red Dragon Rising inspire you to do anything?

Look for a new series.

Ok, Audible's default question didn't really hit the problem with this book/series. The problem is the premise is (not a spoiler, as the books starts with this) massive global climate change has affected the Chinese economy causing them to push expansion into Vietnam for fertile fields to feed their population. This is set in the present, and it is ridiculous. I just completed reading "Shattered Trident", that also had a war between China and Vietnam, which was extremely plausible. The premise for this series requires the worse of global climate change to actually already occurred, and it hasn't. The financial numbers rattled off at the beginning are absurd.

Yet, besides the premise being the cause of war and occasionally mentioned in dialogue. The actual plot has very little to do with it. At its heart, this is a story about civilians caught in the middle of a war, a nation unprepared for the aggression of its neighbors, and how the US government might react to this event. All these items at the heart, have nothing to do with the premise, which actually saves the story in my view. So if you can make it through the first 20 minutes of the book; you'll find a decent story. Oh, and the do the same in book 2 of the series.

Totally disagree with the previous reviewer. I found the plot moved quickly and I was really taken along. I will be really interested in a sequel.

excellent book in all categories<br />

Ilistened to 100 audiobooks, this is the first one I GAVE UP ON.
MOVED LIKE A TORTOISE on QUALUDES.

Couldn't listen to it.

What would have made Red Dragon Rising better?

The chapters all cutout halfway through!

What could Larry Bond and Jim DeFelice have done to make this a more enjoyable book for you?

The book could have been complete.

Anger because I couldn't listen to it.