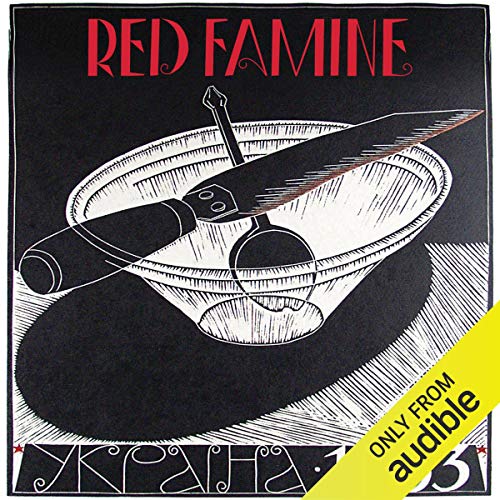 The momentous new book from the Pulitzer Prize-winning author of Gulag and Iron Curtain.

In 1932-33, nearly four million Ukrainians died of starvation, having been deliberately deprived of food. It is one of the most devastating episodes in the history of the 20th century. With unprecedented authority and detail, Red Famine investigates how this happened, who was responsible and what the consequences were. It is the fullest account yet published of these terrible events.

The book draws on a mass of archival material and firsthand testimony available only since the end of the Soviet Union, as well as the work of Ukrainian scholars all over the world. It includes accounts of the famine by those who survived it, describing what human beings can do when driven mad by hunger. It shows how the Soviet state ruthlessly used propaganda to turn neighbours against each other in order to expunge supposedly 'antirevolutionary' elements. It also records the actions of extraordinary individuals who did all they could to relieve the suffering.

The famine was rapidly followed by an attack on Ukraine's cultural and political leadership - and then by a denial that it had ever happened at all. Census reports were falsified and memory suppressed. Some Western journalists shamelessly swallowed the Soviet line; others bravely rejected it and were undermined and harassed. The Soviet authorities were determined not only that Ukraine should abandon its national aspirations but that the country's true history should be buried along with its millions of victims.

Red Famine, a triumph of scholarship and human sympathy, is a milestone in the recovery of those memories and that history. At a moment of crisis between Russia and Ukraine, it also shows how far the present is shaped by the past.

What listeners say about Red Famine

This book is a warning from history of the dangers of communism, too few people nowadays know of this history. An important book.

This book reveals the horrors of the Moscow-planned famines in Ukraine and the other Soviet actions to destroy Ukrainian society.

Something too briefly mentioned is that, because of their treatment by the Communists, some Ukrainians fought for the Nazis against the Soviet forces but, when they realised what the Nazis intended, set up as Partisans, attacking both the Soviets and the Nazis.

Red Famine is really worth reading/listening to. The narrator performs excellently.

not easy to engage

I lasted into the preface. The prose was lumpy and repetitive. Key phrases were overused and that was just the preface.
I just know i wouldn't have lasted much longer. What with the combo of that and the Narration it wasn't easy to engage with this important book.
The narration lacked the gravitas required, with little or no cadence to emphasize what was happening. It couldnt have been easy with that script however.
If only we could bring back Laurence Olivier, he could bring historical solemnity and grandeur to reading a shopping list.

I listenened to this as I lay in bed with Covid. Indispensable listening at a time like this. Applebaum's prose is powerfully simple and the narration had a steely lucidity to match

Devastating but essential coverage of Ukraine’s history. A warning from the past. Long live the fighters.

compulsory listening, scholarly and impassioned. resonances with the current Russian War against Ukraine are terrifying.

Look what Russia did in the 30,s

All people involved in positions of international affairs or who have an influence on the international stage MUST read this book . To understand what is happening in Ukraine today you need to understand what happened yesterday. This book exposes the secrets of the terrible treatment inflicted on Ukraine during the time of Stalin. It gives us a glimpse of the fighting spirit which we are all admiring today. Long Live Ukraine!

An important contribution to the history of Ukraine.

A courageous and important book. Anne Applebaum’s careful scholarship reveals the appalling truth about this tragedy.