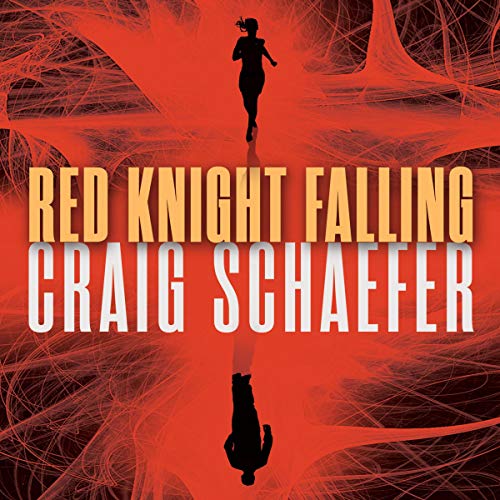 FBI agent Harmony Black and her team, Vigilant Lock, face a new type of threat: one from beyond the stars.

They'd always heard the Red Knight was an urban legend: in 1954, three years before Sputnik launched, a mysterious satellite was sighted circling Earth, though no power on the planet had such technology.

But the Red Knight is real, and what's more, it's inextricably linked to a supernatural force no one yet understands. Like a moth to a flame, this dark presence collides annually with the airborne satellite. Except this year the Red Knight is on course to crash-land...in Oregon.

Vigilant Lock sets out to find the crash site and secure the remnants before the mysterious power is drawn to Earth. But they soon discover the mission is far from straightforward - and they aren't the only ones tracking the Red Knight. To stop a deadly occult threat, Harmony and her team must use all their resources: technology and sorcery, science and magic. Fortunately, Harmony has only begun to discover her growing power.

Tightly woven plot with unpredictable turns and imperfect, like able characters. Can't wait for the next one!

I prefer Schaefer’s Faust novels, but this second Harmony Black book is good and stronger than the first.

I found myself hating Agent Temple, but when I stepped back, I realized it wasn’t her actions or even her words that were driving that response—it was her narration. Traister is generally a decent narrator, but the voice she’s chosen for the character is obnoxiously over the top, exaggerating her worst traits and transforming what should be a decent supporting role into an annoying caricature.

Could be the worst book ever

This was trash bad reader, horrible story. Couldn't get past the 1st 5 minutes what a waste of money!

Craig Schaefer writes a great book to listen to over several weeks of commuting. From his Faust series to this new Harmony Black series they have all been enjoyable and fun listening. Kudos sir.

Things get crazier than ever with this unique team called “Vigilant Lock”, created by the FBI to fight and to beat the evil beings that are created by and are from the “other worlds and dimensions”, unknown to the average person.
Against all odds, this team continues to take down the most difficult enemies. I can’t wait for more!

On 2nd reading. Keeps on the pace and character development. Well worth a credit! Omg, there's more...NEXT!

Trouble from the sky!

Red Knight Falling by Craig Schaefer and narrated by Christina Traister continues the series in this book 2. With an evil from beyond our planet, lots of mysteries to solve, more creatures like Jessie, a nosy reporter, and an object to return to space before the Earth is invaded by something unspeakable....just another job!
Very exciting and crazy good! Lots of suspense and action! Love the narration too!

if you just had a different reader, story is good reader is not, either she change her tone or NEW READER PLEASE.

interesting series, gets better with this volume. preformed very well and keeps you listening. look forward to the next installment.

The premise of this book is a riff on the Black Knight satellite conspiracy theory. It's the occult version of a technothriller, and observes the usual cliches, such as untrustworthy WASPs in high places talking funny; the phrase &quot;terminate with extreme prejudice&quot; does in fact occur in the book.

Couldn't tell you much more than that, since the book takes a long time to get moving, and I bailed on it before it did. The issue was the narration. Christina Traister's women aren't afraid to occupy space, and she gets a nice 1940s sass and swing, like Caity Lotz. This is a very punchy style, and unfortunately she doesn't modulate her performance very much. Most of the text gets attacked hard, even lines like &quot;We set up camp at dusk,&quot; which is at odds with actually telling a story. Everything is emphasized, so nothing is emphasized.

I tried four or five times to get through the book, and the punchiness defeated me. It made it too hard to follow what was going on, like a kid running around and honking a horn while you're trying to have a conversation. After a while my ears started to hurt.

This book was okay, not as good as the first but still enjoyable. There were a few bits that had me rolling my eyes or sighing in annoyance at the characters, but overall I would say it's decent. My real issue was the narrator. Her voice is nice enough, and in the first book I had no issues with her narration, however in this book there are several foreign characters and her accents are just awful. Her London accent was particularly painful and she clearly got it from watching to many Dick Van Dyke films as a kid.

Good but not so good accents.

The Harmony Black series really gets going here after a so-so start with the first novel. I don't LOVE the narration, but it's improved here when compared to the first book.