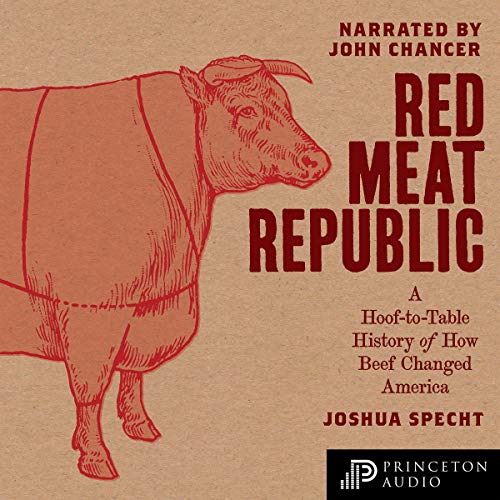 By the late 19th century, Americans rich and poor had come to expect high-quality fresh beef with almost every meal. Beef production in the United States had gone from small-scale, localized operations to a highly centralized industry spanning the country, with cattle bred on ranches in the rural West, slaughtered in Chicago, and consumed in the nation’s rapidly growing cities. Red Meat Republic tells the remarkable story of the violent conflict over who would reap the benefits of this new industry and who would bear its heavy costs.

Joshua Specht puts people at the heart of his story - the big cattle ranchers who helped to drive the nation’s westward expansion, the meatpackers who created a radically new kind of industrialized slaughterhouse, and the stockyard workers who were subjected to the shocking and unsanitary conditions described by Upton Sinclair in his novel The Jungle. Specht brings to life a turbulent era marked by Indian wars, Chicago labor unrest, and food riots in the streets of New York. He reveals how the enduring success of the cattle-beef complex - centralized, low cost, and meatpacker dominated - was a consequence of the meatpackers’ ability to make their interests overlap with those of a hungry public, while the interests of struggling ranchers, desperate workers, and bankrupt butchers took a backseat. America - and the American table - would never be the same again.

Compelling and unfailingly enjoyable, Red Meat Republic reveals the complex history of exploitation and innovation behind the food we consume today.

An excellent introduction that covers all the bases

I was expecting this book to be dry. The author makes the subject a great historical read.