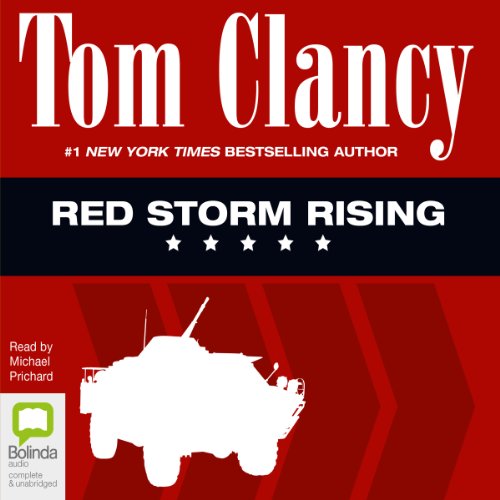 When Moslem fundamentalists blow up a key Soviet oil complex, making an already critical oil shortage calamitous, the Russians figure they are going to have to take things into their own hands. They plan to seize the Persian Gulf, and more ambitiously, to neutralise NATO. Thus begins Red Storm, an audacious gamble that uses diplomatic maneuvers to cloak a crash military build-up. When Soviet tanks begin to roll, the West is caught off guard. What looks like a thrust turns into an all-out shooting war, possibly the climactic battle for control of the globe.

"Sheer grit and perserverance turn the tide in this chilling, fleshed-out war game. Readers emerge elated and breathless, with a new vision of war and its wins and losses. Clancy will win an army of fans who will be looking for more." (School Library Journal )

"He constantly taps the current world situation for its imminent dangers and spins them into an engrossing tale." (The New York Times Book Review)

Classic. Stands up over time. Some interesting parallels and reflections to consider! Athr Audio book is like a two week movie.

Exactly as per the written book but even better as the narrators voice suits the story.

Would you listen to Red Storm Rising again? Why?

I have re-listened to sections of the book, it has quite a lot of detail which suits a second listen

What was one of the most memorable moments of Red Storm Rising?

What does Michael Prichard bring to the story that you wouldn’t experience if you just read the book?

Consistency with a lot of the other Clancy books I've listened to. He's become the go to voice of the earlier Clancy novels

No, there is a lot to digest

Excellent book, well worth a listen. I would rate it in my top 3 of Clancy novels

What did you love best about Red Storm Rising?

Red Russia and their Marxist views failing yet again.

It kept me wondering how bad things could have been if the Soviet Union didn't collapse.

Realistic view on what could have been

I'd read this book some 15 years ago or so. Listening to it again now, with the hindsight of more recent events and the state of world politics as it is now (in 2014) it's quite prescient about how things could have developed (particularly as regards "non-state aggressors"). The story actually moves along at a decent clip, so it didn't feel like you were plodding away through a long novel. That said, One of the weak points that I remember from reading the book applied to the audio version too. It's easy to lose track of all the characters, especially the Russian ones, as to who is who exactly. This is very true when it comes to players who you haven't seen/heard for a few chapters later on in the book.

Michael Prichard did a reasonable job narrating this, but he could do with a bit more variation for the characters. There's a few times where you have 3 or 4 characters talking, and it's too easy to find yourself losing track of who's saying what.

All in all it's a good book, if you're into techno thrillers, and it's one of Clancy's better ones, quite probably because it was an early one that he wrote completely himself, and without the more convoluted character history that eventually put me off the later Jack Ryan series (although Hunt For Red October is still a personal favourite. If you're listening to this, you'll want to do it in big chunks, just to make sure that you keep the story straight and get the most out of it.

Yes. It's too good to keep to oneself.

A professional rendition in a very acceptable accent.

The arranged explosion at the Kremlin.

It is easy to see just how easy it could be to start the next war.

Read this book when it came out and hasn't lost any of it's dynamism on listening again my years later. A good strategic overview of what if scenario , highly recommend.

As good it was in print

I last read this book nearly 30 years ago on first publication. It's sheer scale was as immense as back then, and always looked forward to my next story fix. Just wish someone had the time and money to plough into a TV adaptation, as the big screen would be far too limiting for this story.

One of the best Clancys

Clancy at his best

Tom Clancy at his very best, a riveting story and a must read for all fans.

Survives the test of time

Really enjoyable. I listened to audiobook which recommend. Sure its a good read too. A well thought plausible scenario played through for war between nato and ussr. Includes fascinating account of submarine warfare (ref to this book came from Hunter Killers by Ian Ballantyne) as well as other theatres. You can tell Clancy did his homework.

love this book, none stop from start to finish. although there are a myriad of personalities and side stories, they all mix well and each account has you on the edge of your seat.

When the narrator ruins a great story.

Got through the first chapter then couldn’t take it any more. What a waste of money.

A great story that was well read.

I am excited to hear another story soon.

Sorely let down by the narration

The narrator sounds like a computer generated voice and this title is slavishly read as the original text rather than actually read as a person would. The abbreviation mk. donating the work mark is read as it constituent letters M K as an example and this is done throughout. This is fine if you are familiar with the parlance but not so much if you are not.

Story is still a classic

there is a jump in-between chapters 39-40 which ruined the tense build up. hours of build just to skip the climax

Not a simple tale

This is one of the best of Clancy's books. It is a standalone story that resonates in the current 2022 climate. There are obviously some dated parts but it doesn't detract from the story.
The narrator did a good job with the characters and I enjoyed his reading.
Well worth the time as it is a long book at over 35 hours.

Tom Clancy’s knowledge of international politics, operational and tactical doctrine of NATO and Pact forces really pays off in this book. Considering this is written in the 80s, it’s surprisingly accurate even in hindsight.

Red Storm Rising is a masterpiece.

It's probably not for everyone the way way it switches between characters. But if you can keep track of who is who and remember what and where they are all coming from then this book is hugely rewarding.
An epic tale that sees NATO and Russian forces locked in battle across Europe, the Atlantic, and Iceland, above and below the surface of the sea, in the air over naval convoys and Europe, tank battles in the streets.
This book is a long and complicated one but well worth effort.

Pity there wasn't a sequel. Well written and narrated. No more technical than required for storey flow. Excellent characterisation.

As always, the books that were actually written by him are fantastic, really brilliant. the ones ghost written after his death, not so much.

I always enjoy listening to books and will be buying more over the few years.