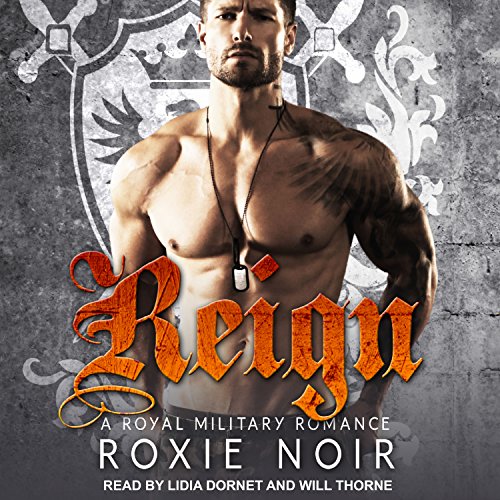 Some fairy tales start after midnight.

The crown prince and I have nothing in common. He's a rugged, battle-hardened soldier who spent four years in the Royal Guard, an elite military unit. I met the king and queen for the first time wearing leggings and a sweatshirt. But there's the way he looks at me. Like he knows every dirty thought I've had about him - and he likes them. There's the way my pulse skyrockets every time his hand brushes mine. I'm the ambassador's daughter. I know better than to mess around with a foreign head of state. But I don't know how long I can resist.

Not all princes are charming.

I spent years in the Royal Guard, our most elite military unit, fighting like hell so I could rule one day - not so I could give my father an heir with some well-bred rich girl. I have a f--king country to run. My love life can take a back seat. It's not like I've ever met a girl I had to have - until her. I can't stop thinking about the way she laughs, about how she might taste. My father's threatening to strip me of my title if I touch her, but she makes me want to break every one of my own rules.

What listeners say about Reign

Hazel has been invited to spend a month in Sveloria by her Mother who is the American Ambassador there and she happily agrees as she dropped out of Med. School a few months earlier and hasn't made plans for her life yet. However, when she steps off the train after hours of travel, the last thing she was expecting or wanted was to be formally introduced to the King, Queen and handsome Prince of Sveloria. From their first meeting, it was clear that sparks flew between Hazel and Prince Kostya.. and that it was just going to be a question of where and when.. but a few things stood in the way.

Prince Kostya was getting pressured by his cold heartless father to wed and produce an heir so a likeable candidate with all the right lineage was ever present.. but Kostya wouldn't be coerced into marrying without love. Since meeting Hazel, and finding an ease when talking to her, Kostya's mind has been consumed with sexy improper thoughts of her - what she would smell sound and taste like.. and it wouldn't be long before he would know the answers. And, for a week, things are wonderful.. but then the unthinkable happens and lives change, danger looms and their relationship suffers.

A modern day fairytale.. with young lovers, an ogre of a father and a dark force to be won over or crushed. Fairly insta passion and sex with romantic words and sweet sentiments errr 'coming' a week later. I think I could have happily listened to the smooth witty dialogue and storyline in one sitting - it was light, had humorous banter, a dashing Prince, a down-to-earth feisty heroine and sexy scenes too but the CONTINUAL over use of the words say and says was just too much. No 'saids' here - in ONE chapter lasting 8 minutes I went back and counted 50.. yes 50 I say or he says and 26 alternative SAYings for the word... arrrgh enough! enough torture I'll tell you everything just please stop SAYing say!! This could have been a 5 star listen if it wasn't for the says - and also that it suddenly went from one sexy scene to the final chapter which was a year later at the wedding rehearsal then it just abruptly ended.. and sadly an Epilogue never came. Dual POV storyline and both narrators did a great job making, IMO, the thousands of SAYs after someone spoke totally unnecessary.

Worth a credit? It was entertaining, well narrated, totally unrealistic, insta everything and I enjoyed most of it and certainly won't be asking for my credit back so YES, IMO, it's creditworthy.. but don't say I didn't say anything about all those frustrating says!!

This could be a definite re-listen. Author and both narrators are new to me, but man did it all work together nicely. A great story with a fantastic narration. I'm not Russian, so I can't say if the accents were perfect. But, both male and female narrator American and Russian accents sounded totally fine to me. The story was engaging. Loved the characters, like all of them. Had a nice mix of romance, suspense, drama, and humor. I could have listened in one sitting, and had to force myself to put it down to get work done. Sure hope there is more coming from this team.

I read this book by Roxie Noir before I listened to. I loved it then, but think the audiobook is so much better! Both Lidia Dornet and Will Thorne did such a fantastic job with their performances. I loved how both of them were able to inflect the Russian accents into their narration for the characters when needed. This is a sexy listen and a standalone book. I will definitely listen to this book again! I will also look for more audiobooks by this author and both narrators. They are that good! This book is performed in the Dual Narration style where one narrator will perform the entire POV chapters.

If you could sum up Reign in three words, what would they be?

What is next???? I loved this book, maybe it was just he sexy Russian accent by Will

I enjoyed this book, but I loved Will the best , his Russian accent just made me love this story.

What does Lidia Dornet and Will Thorne bring to the story that you wouldn’t experience if you just read the book?

Lidia also did a great job, but Will was just phenomenal

I hope to see more books on audio by Roxie.

I was really entertained by this sexy, funny and well thought out story. The heroine is the daughter of the Ambassador to a small ex-Soviet country and arrives for a visit after backpacking all over Europe. What she didn’t expect was to be met at the train station by her parents, the King & Queen and their gorgeous son, the Prince. Even though embarrassed to be seen in spandex and an old sweatshirt, she’s attracted by the aloof Prince. The storyline is too entertained to share here, but there is plenty of romance, some suspense and a great ending. I highly recommend this audiobook. The Narration was just perfect, especially the male voice!

How many times can you say "I say"?

Loved it! Great romance story. Hated the princes dad. Loved The lead Hazel and the prince.

Favorite made even more so, Audibly

This has forever been a favorite, go-to/reread story of mine, made even more so thru Audible. Samples are nice, but I was still cautiously optimistic with the dual accent needed because...difficult. Not. Nailed it narrators, super well done, thanks.

I am so blown away by the story. It has so much content that kept me wanting more with surprising twists. wow!! Definitely a book to listen to again, no doubt. A definite favorite.

this was a good story great characters. thank you for writing it for us to enjoy

This was fun, enjoyable, with great narration. I listened to it all in one sitting.

The only reason I’m giving it 4 stars is because it does the thing I hate... it doesn’t give me a super good reason for the prince to be in love with the medical school dropout. That being said I didn’t care nearly as much as I normally do. Normally this drives me nuts. It is like my number one pet peeve when it comes to romances.... always the guy is amazing but the girl is just average but somehow the guy is head over heels for her. This time it didn't bother me at all. Maybe because she did not really initially want to be there... I don't know but somehow, someway, this time it worked. Loved this book.

This was a new to me author and narrators would definitely seek them out again.