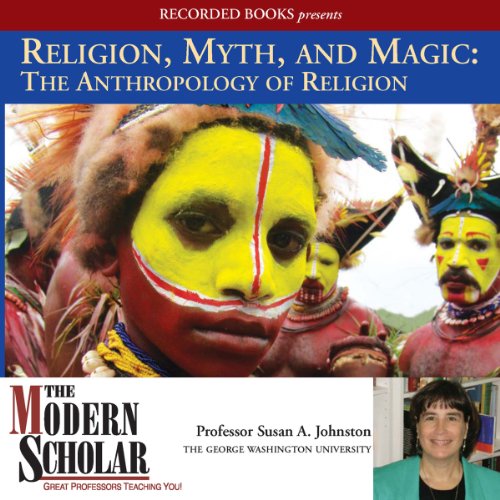 Anthropologist Susan Johnston turns a scholarly eye on one of humankind's primary interests throughout history: the spiritual belief system. Beginning her lectures with an attempt to define religion, Professor Johnston continues this intriguing study with an examination of mythology and symbols, rituals and witchcraft, gender, politics, and religion's place in the many customs surrounding death. A continuing and often contentious presence in the world today, religion, from its origins to the present, is a key component for understanding communities and cultures all over the globe.
©2009 Susan A. Johnson (P)2009 Recorded Books, LLC
World
Show More Show Less

If you’re unfamiliar with studies of the topics mentioned in the title of this book, it may be of interest to you. If, however, you have done done any previous study in these areas, I cannot recommend it. Each chapter/lecture is less than half an hour long and, thus, contains approximately 10-15 minutes of introduction and less than twenty minutes of less than of examples—most of which are poorly explained.

For example, the chapter on symbols spends entirely too much time on familiar American examples (the American flag and the “yellow ribbon tied around a tree”) before moving on to what could have been a fascinating explanation of a symbolic ritual exchange practiced by a tribe in Papua New Guinea. The lecturer begins by explaining that this ritual exchange is about status and that status is represented by the exchange of bracelets and necklaces. She then drops the topic of the exchange entirely and, instead, focuses on the canoes made for the practice. Although she does a good job of describing and explaining the meaning of the symbols on the canoes, she never explains how these canoes play a role in the ritual exchange. In fact, she never mentions the ritual exchange again. It’s almost as though part of the lecture was left out.

Such gaps and surface explanations of interesting, unfamiliar topics and practices in world religions, myths, and, especially, magic make for a disappointing listening experience for anyone truly interested in in a deeper understanding of these topics. Better to have covered fewer topics in much greater depth.

This highly academic approach to a potentially lively and fascinating subject, didn't work for me. Each point was labored, the same few examples referenced over and over. Perhaps I've been spoiled by the exhilarating work of Joseph Campbell and his followers, but this felt bone dry.

As a UK listener, constant references to (specifically) America as "us" and "we" grew wearing, while the delivery was flat and humorless and the dense, rather harsh tone of the lecturer's voice and accent grated from the outset.

Professor Johnston's lectures are full of information - strong on case studies, name-checking countless anthropologists and their research etc. - so I can imagine how useful this could be for those researching and writing around the subject. However, for a casual listener such as myself, this lacked any spark of vitality - or indeed, Magic.