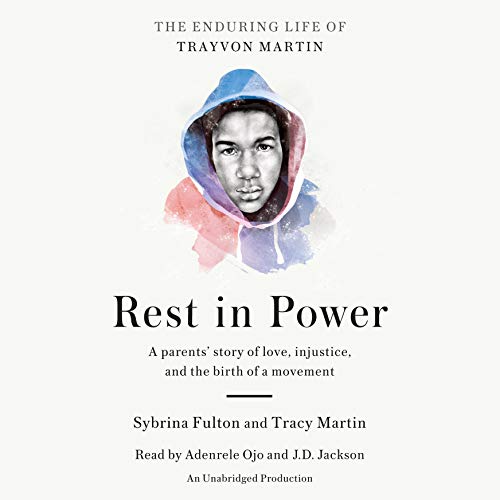 Trayvon Martin's parents take listeners beyond the news cycle with an account only they could give: the intimate story of a tragically foreshortened life and the rise of a movement.

Now a docuseries on the Paramount Network produced by Shawn Carter.

On a February evening in 2012, in a small town in central Florida, 17-year-old Trayvon Martin was walking home with candy and a can of juice in hand and talking on the phone with a friend when a fatal encounter with a gun-wielding neighborhood watchman ended his young life. The watchman was briefly detained by the police and released. Trayvon's father - a truck driver named Tracy - tried to get answers from the police but was shut down and ignored. Trayvon's mother, a civil servant for the city of Miami, was paralyzed by the news of her son's death and lost in mourning, unable to leave her room for days. But in a matter of weeks, their son's name would be spoken by President Obama, honored by professional athletes, and passionately discussed all over traditional and social media. And at the head of a growing nationwide campaign for justice were Trayvon's parents, who - driven by their intense love for their lost son - discovered their voices, gathered allies, and launched a movement that would change the country.

Five years after his tragic death, Travyon Martin's name is still evoked every day. He has become a symbol of social justice activism, as has his hauntingly familiar image: the photo of a child still in the process of becoming a young man, wearing a hoodie and gazing silently at the camera. But who was Trayvon Martin, before he became, in death, an icon? And how did one black child's death on a dark, rainy street in a small Florida town become the match that lit a civil rights crusade?

Rest in Power, told through the compelling alternating narratives of Sybrina Fulton and Tracy Martin, answers, for the first time, those questions from the most intimate of sources. It's the story of the beautiful and complex child they lost, the cruel unresponsiveness of the police and the hostility of the legal system, and the inspiring journey they took from grief and pain to power, and from tragedy and senselessness to meaning.

“A reminder - not only of Trayvon’s life and death but of the vulnerability of black lives in a country that still needs to be reminded they matter.” (USA Today)

“A brave, heart-rending narrative from the parents who lost their son far too soon.” (Kirkus Reviews)

Some die so that others may live

Where does Rest in Power rank among all the audiobooks you’ve listened to so far?

Up there with "The Hate You Give", my favorites so far this year.

I didn't like anything about the story. It's the kind if book that MUST be read, its not to be enjoyed (not in that way, anyway). Wish I never had the opportunity to read the story of Trayvons murder. I cried through the first couple of hours, listening to the emotions of Trayvons' parents relive the discovery of the murder of their child. It's almost unfathomable. I'm a step parent of a young man I love so much that it literally, physically hurt to listen to this story.

If I could replace "interesting" with "disturbing", it's that: if Zimmerman were a black man and Trayvon a white teenager, I have ZERO confidence the trial would have played out the way it did in this tragedy. As a caucasian, even though I had nothing to do with the race I was born into, I get that white privilege has played a role in my life- like it or not. And if that were my boy walking that complex that fateful night, he'd be alive to tell me that some creepy dude stalked him. My responsibility as a human being is to acknowledge this and instill something better in the next generation. "The Hate You Give" was my favorite young adult book. I'm getting the hard copy for my toe-headed child who sees the world, already, through a different set of lenses than Were given me. This will be on his summer reading list as well. I'm so sorry for the loss that inspired this book, i'd much rather think of him struggling in High School, being bugged by his parents and scared or excited for his future.... like most teens... anything but the fate handed him by a jack-ass wannabe who should have stayed in his damn car if he was so afraid!! I'm so mad at Zimmerman and so inspired by the courage of Trayvons family to stand up for the young lives of those that follow their son.

TRAYVON IS MY SON. RIP (power) young man and in the knowledge that because of the life that YOU led and lost, another young, black man can "maybe" walk the streets, with a bag a skittles and a can of tea, a little safer than he would have before your brave parents refused to let your death be in vain. Wake up people, SKIN IS NOT A SIN!!!!

This book was very well written. It shows the courage of the parents. Loved it.

This book touched me beyond words. The narrators are outstanding and it is so beautifully written. A beautiful memorial to a life taken to soon.

So powerful and so moving

This book is one of the best books I've heard in a while. I will continue to recommend to all my friends!

As heartbreaking as the murder of Trayvon Martin was this book was impeccably written by his parents as they take you through their own experience. This book is highly recommended and the narrators were excellent. RIP Trayvon Martin. You will never be forgotten

read this book if you enjoy crying

cried alot, I can't begin to imagine how devastating it would be to lose a child. helps put a human perspective on a highly publicized event. hard to keep my attention at times. overall decent book.

This is a heartfelt story of 2 parents

They lost their child but turned their loss into a national movement. They brought light to the everyday horrific truth of being black in America. I thank them for telling their story and starting the conversation.

powerful the true meaning of A Parent's Love

the narrow is good major really visualize I understand the feelings would read this over again. good book