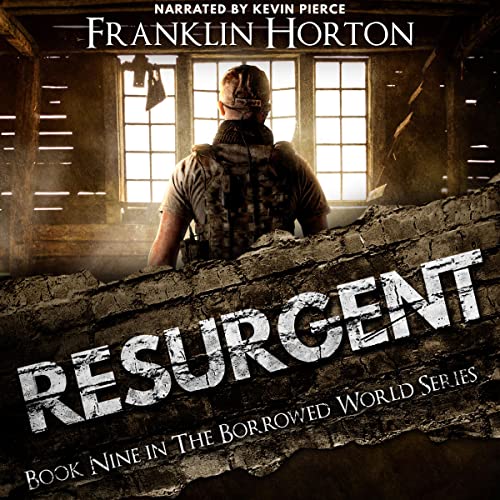 The fog of indecision has passed.
The struggle with guilt is over and the path forward is clear.
The Jim Powell who fought his way home in the days immediately after the disaster - who left a trail of blood and bodies across the state of Virginia - is back.

For a year now, Jim Powell has wrestled with his personal demons. As he watched people around him suffer and die, he harbored a secret guilt. He'd once wished for an event like the one America was now experiencing, dreaming of the great reset that would purge the nation of those who'd gone soft and weak.

As he discovered this past year, it was not only the weak that died, though. There was always collateral damage. Even the most prepared could die through random chance and bad luck. Each time a friend or loved one was lost, Jim felt a deep shame. Had his desire for a reset brought death and misery to his community? Had he manifested this?

Even if he couldn't accept blame for the state of the entire nation, there were other events that he was directly responsible for. He was prone to violent overreaction when he felt his freedom was being threatened. Unfortunately, his overreactions often made him and his family a target, such as when he destroyed a local power plant. In the aftermath, the government labeled him an insurgent and many in the community turned against him.

Hoping to keep his family safe, Jim faked his death and went into a period of self-exile. Traveling the mountains with his friend Lloyd, Jim got his head together. Now, he has a plan.

There will be no more living in the shadows and keeping a low profile. It's time to root out the people who threaten his family and attempt to turn his neighbors against him. This time he won't retaliate with words. Instead, he'll become the plague that scours his enemies from the face of the earth. He understands now that this is ultimately who he is and there is no option but to embrace it.

What listeners say about Resurgent

Another chapter of Jim’s story

It’s a solid continuation of Jim’s story. When I first started listening to it I thought perhaps I missed a book as it referred to the mad mick. I even went back to the previous book and looked for mad mick’s part. Turns out the crossover is in the mad micks storyline in book Ultraviolent. Feeling like I missed something I got that book and listened to it first, feeling like I missed a part of the story. I don’t follow the mad mick series. It helped to listen to Ultraviolent first though if you’re not interested in that series and can overlook missing some details about a past event that is occasionally referenced I’d skip it.

What a great series!

Franklin and Kevin knock another one out of the park. I can't wait to see what happens next.

I loved this book by Franklin Horton. I also loved the characters. I can’t wait for the next book in this series. I would recommend this book and all of this Franklin’s books. I listened to this book on audiobook.

I enjoy ready other series and coming back to this series. I grew up in this area. It's always interesting to see it from another's point of view. The good, the bad, and the ugly.

Jim is not always an endearing character, but he is perhaps what is necessary for the present world he lives in. A soft civilization that has been conditioned to look to the government and technology for all its needs is what Appalachia had become. Jim, is perhaps what it needs to transition thru the darker times to be able to survive. I'm not making a political judgment, but if you have not lived in and around Appalachia with bad jobs bad drugs and no hope, then perhaps you don't know what it once was and now is. This series gives a perspective on what could be and is imo generally honest in its representation. It's dramatic of course but it's a good story. That's why we read.

The narration is excellent as usual and I recommend the book and the series as a whole.

Franklin is one of the best authors in this type of book. He does a great job with making you hate the characters he wants you to. I have yet to be disappointed with any of his books.

Mr Horton gave me some laughs and a scare or two with this one. I think book 8, Blood and Banjos was probably my least favorite of the BW series(not a bad book, just my least favorite of the series thus far), but Resurgent kicked it back up a notch. Never been a big book guy in my life, but this series will, at the very least, give you some awareness of the things that could likely happen in this post apocalyptic scenario. It’s given me better ideas on how I can be prepared for such an event. Great book. Great series. Great author. And Kevin Pierce, as Mr Horton himself said, gives his books a grandfatherly tone that I think pairs well with the series.

I’ve enjoyed all the books in the borrowed world series. Not only is it a great story and very entertaining, but it’s motivated me to take my own preparation more seriously. I’d rather have a plan and not need it, than need a plan and not have one.

These books are terrible in so many ways , but I am completely and utterly addicted!

I just put 2 and 2 together and realized that this is Jim Powell from the Mad Mick series love these books!

The team of Franklin Horton and Kevin Pierce are unbeatable!! I seriously listened to 2 books back2back... this one and the Mad Mick's Death Dealers. Wow!! Absolutely terrific in every way... action-filled, Charlie coming into his own and Jim Powell telling it like it is..not spoiling, read/listen to the book. Excellent!!