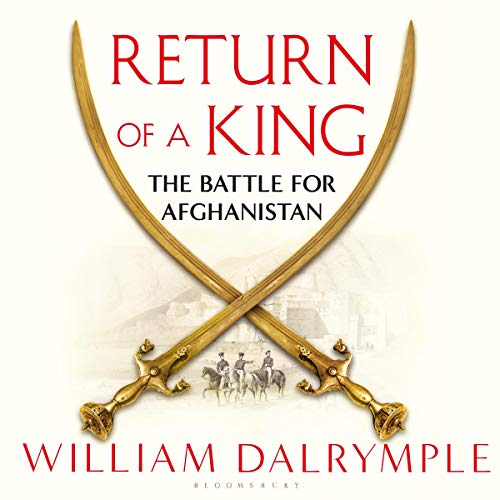 Bloomsbury presents Return of a King by William Dalrymple, read by Sagar Arya.

Shortlisted for The Samuel Johnson Prize 2013

In the spring of 1839, Britain invaded Afghanistan for the first time. Nearly 20,000 British and East India Company troops poured through the high mountain passes and re-established on the throne Shah Shuja ul-Mulk.

On the way in, the British faced little resistance. But after two years of occupation, the Afghan people rose in answer to the call for jihad and the country exploded into violent rebellion. The First Anglo-Afghan War ended in Britain's greatest military humiliation of the 19th century: an entire army of the then most powerful nation in the world ambushed in retreat and utterly routed by poorly equipped tribesmen.

Using a range of forgotten Afghan and Indian sources, William Dalrymple's masterful retelling of Britain's greatest imperial disaster is a powerful parable of colonial ambition and cultural collision, folly and hubris. Return of a King is history at its most urgent and important.

"This sorry saga has been recounted many times, but never that I can recall as well as by Dalrymple. He is a master story-teller, whose special gift lies in the use of indigenous sources, so often neglected by imperial chroniclers." (Max Hastings, Sunday Times)

"Enchantingly written.... In Dalrymple’s usual happy style of historical narrative, applied to a fascinating, neat and highly suggestive series of events, this long and involved book will be a great success, and bring the famous story to a large new audience." (Philip Hensher, Spectator)

"Of the books swooped into being by his scholarship (to which he himself has applied the adjective 'obsessive'), this one is the most magnificent.... His account is so perceptive and so warmly humane that one is never tempted to break away.... This book would be compulsive reading even if it were not a uniquely valuable history, which it is, because Dalrymple has uncovered sources never used before." (Diana Athill, Guardian)

What listeners say about Return of a King

It took me just a bit to get into it, but once I did I couldn't wait to listen again. I knew the basics but the details of the first Anglo Afghan war are fascinating, complex, tragic, and incredibly interesting.

As a side note, stay for the research acknowledgements at the end. It not only shines a light on the extent of Dalrymple's thoroughness but also illustrates how dangerous the area remains.

For anyone interested in early 19th Century history, the history of the Great Game, history of Afghanistan or the British in India this is a must have. Well researched & an excellent story in which the author went to extreme lengths to understand the history & appreciate Afghani society & culture. I recommend this book.

I knew roughly what Dalrymple's book was about, but was not prepared for the story of incompetence and ignorance, on the part of the British in India, which led them into a hopeless mire in Afghanistan. The Afghan leaders were no strangers to torture and murder themselves, and had the chance to eliminate many of the hated British generals and top bureaucrats. Dalrymple has told the story in great detail, using Afghan sources for the first time, and the result is a masterwork indeed. Sometimes I lost track of who was who, among the Shahs and Emirs, Generals and Governors-General, but the story swept splendidly on - yet vengeance played a huge part in the events, on both sides. The narrator was excellent.