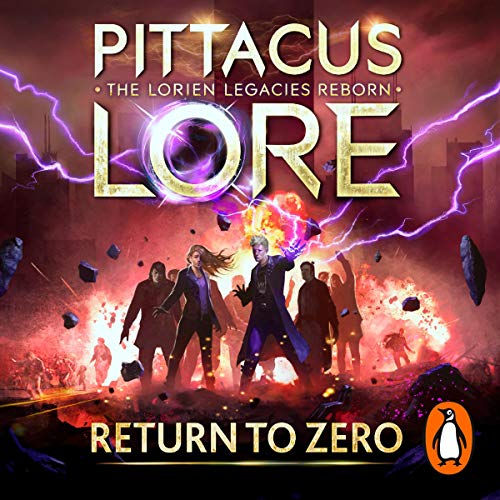 Penguin presents the audiobook edition of Return to Zero, by Pittacus Lore, read by P.J. Ochlan.

After the battle in Switzerland, the Fugitive Six find their loyalties torn, splitting them into two factions. Taylor, Nigel and Kopano join Nine to return to the Academy, but nothing is the same. Fear and resentment of the Human Garde has been growing, and the Academy is under siege.

The United Nations has decreed that all humans with Legacies must be implanted with inhibitors, a move that will take away their power and their human rights. The team have no choice but to fight back. And with the faceless Foundation still at large, Caleb, Ran and Isabela have decided to join forces with their former foes Einar and Five to hunt them down.

But when a new threat is revealed, the group find themselves painfully outmatched. Fractured and facing capture or annihilation on all sides, the Human Garde have to sacrifice everything in a war that pitches them against the rest of the world.

What listeners say about Return to Zero

I'll be honest I was just very happy to come back to these characters old
and new charecters from seeing John Nine Five a little glimpse on Marina Ella and Six Daniala and even Walker to The Fugitive Six Einar and Duanphen who I'd never thought I'd care about. There were 2 main stories with two main groups going on and I was hooked to both whenever a character from the original series would come I would smile so big and really I LOVED to get to know The Fugitive Six also the ending made me sad but was almost perfect The performance was great too with all the accents and also knowing that there were Companian Novellas of Six and Sam and how they were also taking a good amount of part in it made me feel happy the plot was pretty great but really it's the characters their layers redemption and relationships to one another that me enjoy this book alot

This whole series is fantastic!

I didn't think it could get much better after United As One but Pittacus Lore surpassed all expectations with the Generation One series. There's some excellently written MAJOR action scenes that had me holding my breath. Very unique countries are featured, with some great diversity brought in by fresh characters. There are wicked twists and a real depth to the storyline, you will definitely feel some type of emotion by the end. Also some of the much loved OG's put in an appearance. The narrator P.J Ochlan is absolutely amazing and I'm left wondering how he manages to bring so much personality to every single one of the myriads of voices he portrays so naturally. He always manages smooth transitions from one voice to the next, even when the scene calls for several different characters in one conversation.
Some of his accents are in reality, just a little bit off (eg Nigel sounds like Bert the Chimney Sweep from Mary Poppins) but I find that imperfection actually adds positively by bringing some humour. A very satisfying end to this great series and I HIGHLY recommend 😊

cant wait for more, great listen would have liked a few more books in the series though

good series. very thrilling and enjoyable. love the clever twists and characters. except for caleb

THEY ARE GETTING INTERESTING

I THOUGHT THEY HAD REACHED THE END OF THE GREAT INTERESTING BUT YOUR STILL GIVING US MORE TO ENJOY.
THANKS TO THE WRITE AND THE READERS I AM ENJOYING THE NEW BOOKS.

I do enjoy this story what more can I say, but I hope you do too