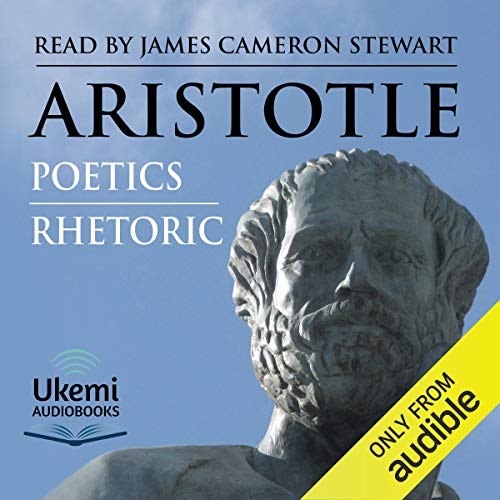 Poetics and Rhetoric are the two major works by Aristotle which, after more than 2,000 years, remain key behavioural handbooks for anyone interested in story, performance, presentation and indeed psychology.

The continuing influence of Poetics, for example, is readily discernible even among the scriptwriters of Hollywood! Poetics is the shorter work, lasting under two hours, whereas Rhetoric - the art of persuasion, an important subject, particularly in Greek and Roman times but even today - is more extensive, running to nearly nine hours.

In Poetics, Aristotle discusses the structure behind drama, comedy, tragedy and the satire plays as well as lyric poetry, epic poetry and music. The structure of a work, the plot, the characters as well as pace and rhythm are all considered. To listen to Poetics is a revelation, like going back to the source of literary theory.

Aristotle developed his view on rhetoric over a period of 40 years, and the work is now regarded as the key source on the subject. In a largely oral world, the ability to speak well and persuade by presentation was crucial to success in human affairs. All the major figures of the period studied the best ways to deliver the spoken word - a necessary skill for orators at all levels. For Aristotle, there were three major elements: ethos (the personal character of the speaker), pathos (the emotional influence of the speaker on the audience) and logos (the content and the argument). Rhetoric consists of three books, dividing the topic into the overview, the means of persuasion and the style.

A fascinating document, it remains required study in the 21st century, not only for public speakers but those involved in all circumstances where persuasion is involved. With ethos - the character of the speaker - underpinning the subject, the positive nature of art of persuasion should be paramount!

What listeners say about Rhetoric and Poetics

The lessons taught in this book are of course brilliant! The narrator was especially impressive for this! He fit the tone of the book perfectly and made the information very easy to digest! I'd highly recommend to any lovers of philosophy!

what a smart guy