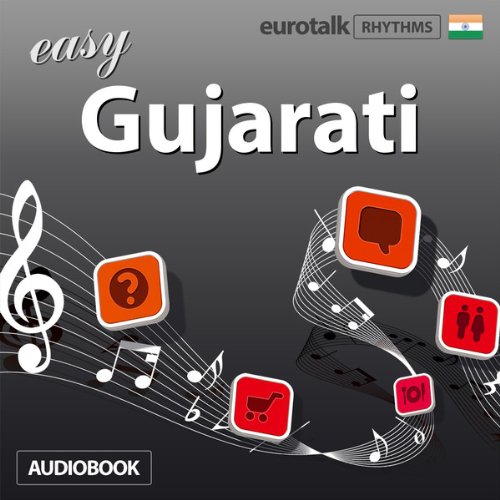 Use your mind's natural rhythm to learn a language with Rhythms Easy Gujarati from EuroTalk.

It's naturally easier to learn something when it's set to rhythmic music, so that is exactly what we've done. Rhythms put your mind painlessly to work: you don't even need to focus! Simple words and phrases are set to a varied pattern of rhythms and music designed to help you learn and to keep you engaged so that you won't just switch off after five minutes. It won't get you fluent, but it will give you an easy road into starting to learn a completely new language.

If you just want a few simple words and phrases before going abroad, Rhythms is all you need. It covers absolute essentials such as how to greet people, basic directions, getting around, food and drink. You'll hear Gujarati spoken by both a male and a female native speaker and there will be plenty of opportunity for you to test how well you're doing with the review stages built in at key points in each track.

Rhythms can be used anytime, anywhere; listen in the car or on the train, walking the dog, doing housework or exercising at the gym. Absorbing a language couldn't be easier and EuroTalk Rhythms has over 120 different languages to choose from.

From our customer reviews: "Finding out about EuroTalk has allowed me to try and learn the language... at my own pace and in my own time. I do not have to wait for a private tutor or for a college to open its doors." "I just can't believe I have progressed as far as I have in such a short space of time." "A great starting point for anyone of any age at all. It makes language fun instead of dull or intimidating." "Made learning a pleasure."

What would have made Rhythms Easy Gujarati better?

1. Needs quizzes at the end of each section, or at least a variety of teaching methods besides just call and response, which is repetitive and not very effective.
2. The background music is not useful or helpful, what is it doing droning on in the background for a straight hour for no reason? Turn it off please, or do something worthwhile with it.
3. Pause to sound out the long and complicated words and phrases. Just saying them three times (inconsistently) and then moving on is not teaching, it's lazy. Did you just do the whole book in a single take?
4. At some point, hearing Gujarati in a real conversation, with English narration might be good.
5. Cultural context is often considered a good addition to a language book, the assumption being that someone is planning to travel to the place, and not offend everyone they come across.
6. Maybe at least attempt to teach the real number system, or give some basic explanation of it if it's really too difficult, instead of encouraging listeners to say "30" and then "3" and hope that someone understands you. (Seriously, they actually say to try this.)
7. This is a big one: Maybe think about teaching some language... There is no explanation of VERBS, NOUNS, and how they go together in Gujarati in the first half of the book, maybe not ever? My wife, who already knows Gujarati, says that it is a Subject, Object, Verb style language, like Japanese, but you wouldn't know that from listening to Rhythms Easy Gujarati.

I don't know, but it won't be anything by EuroTalk Ltd.

The male narrator pronounces the Gujarati words as though he has a mouth full of marbles. His pronunciations would change from repetition to repetition, and often contradicted the female narrator. This problem is hugely compounded by the lack of pauses to slow down and sound out words. They power through long and unfamiliar multi-syllable phrases, repeat three times, then move on to the next word. This format is repeated, so far as I can tell, for the entire book, although I only completed half of it before throwing my hands up in disgust.

Frustration, since it's the only Audiobook that teaches Gujarati, and I'm going there in a few months. I'm going to need to learn through another technique.

De-list this, it's a waste of money.

There isn’t even a PDF so you can read it or check things.. and no proper back and forth convos. It’s a lot of isolated vocabulary.

I really hope someone else comes out with a learn Gujarati audiobook cause this was really disappointing (and currently the only one available on here) but I still want to learn it.