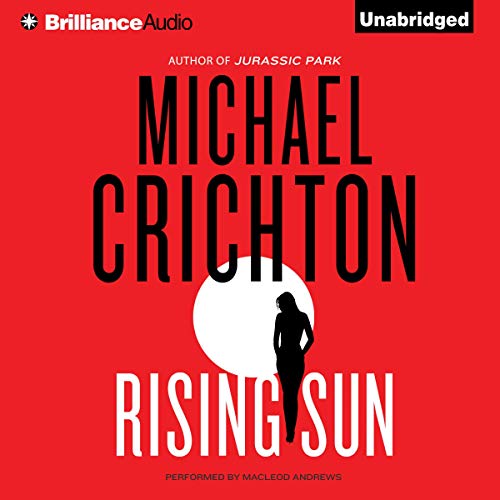 A riveting thriller of corporate intrigue and cutthroat competition between American and Japanese business interests.

On the forty-fifth floor of the Nakamoto tower in downtown Los Angeles - the new American headquarters of the immense Japanese conglomerate - a grand opening celebration is in full swing.

On the forty-sixth floor, in an empty conference room, the corpse of a beautiful young woman is discovered.

The investigation immediately becomes a headlong chase through a twisting maze of industrial intrigue, a no-holds-barred conflict in which control of a vital American technology is the fiercely coveted prize - and in which the Japanese saying "business is war" takes on a terrifying reality.

Rising Sun was made into a film, starring Sean Connery.

"A grand maze of plot twists... Crichton's gift for spinning a timely yarn is going to be enough, once again, to serve a current tenant of the bestseller list with an eviction notice." - New York Daily News

What listeners say about Rising Sun

THESE DAYS, EVERYBODY IS BUILDING WALLS

FIX THE PROBLEM, NOT THE BLAME
Some say this is Japan bashing, but I saw it the other way around. They could not beat us with their military, so they are doing it economically. We keep telling ourselves how great we are and ignoring how the world is passing us by. I am old enough to remember when we made things in the United States. My dad was a quality control manger for Zenith, here in Springfield, Mo. We are still the most innovative people, but we need to quit lying to ourselves and open our eyes. This book is a bit preachy in parts, but it is something we need to hear, not just about Japan, but China, Germany and any other country that decides to make war on us, this way. Basically our politicians brought us down and we need to do something about our system, so we are not taken advantage of, like we have been.

BETA MAX
This is really two books in one. A political book and a murder mystery. Written in 1992, it is dated (a problem most tech books have, as they age). I am not the sharpest tool in the shed, but I had the mystery figured out early in the book. The book fails on the murder mystery side, but the political statements, made it up for it for me. Not enough to go five stars though. There was also a main character who I did not care for. He was a know it all and no matter what happens in the book, he knew ahead of time it was going to happen.

IT IS TIME FOR US TO TAKE CONTROL OF OUR COUNTRY AGAIN.
MacLeod Andrews, has always been one of my favorites and he does not disappoint here.

This is a product of it's time, with respect to international economics, and it's also a preachy and repetitive conspiracy theory......oh, and there's a rather interesting mystery buried underneath it all. I'm not sure whether this is anti-American or anti-Japanese, but it sure seems to be preaching a conspiracy that Japan was (early 90s) poised to take over the US with economics. It says so, again and again. And again.

The actual murder mystery where a young party girl is found dead in the boardroom of a major Japanese office building the night of a major party is quite interesting - particularly since the whole floor was covered by security cameras. Unfortunately too little time is given to that, and too much time given to understanding Japanese culture and how business is war.

Wasn't expecting this to be so interesting!

I have to have an audio book going every day, I'm addicted, and I don't watch TV. With this last sale, I picked up as many as I could to add to the regular-priced 6 - 9 books I buy each month -- which gets expensive. A lot of the book were larks, titles not on my wishlist and many I'd never heard of. I chose according to the Audible reviews, what listeners liked the best. There have been only a couple I couldn't make it through, but I have to say, *Wow! You guys are good!* I've liked most of them and it was fun to read outside my usual aisles. Rising Sun was one of those surprises. I expected Crichton to pack a lot of suspense and thrills into a good story, but I was concerned whether this book would be relevant to today, or if it would be too dated. Well, surprise surprise! This was a winner with a lot of political relevance 25 yrs. after the original novel was written. Thoroughly enjoyed and recommend. Thanks for the great reviews that led me to this one.

Fan of the book and movie

I enjoy a lot of Crichton so when I saw Rising Sun hit audible I snagged it (and Sphere, great book but didn't like the movie). I thought the book was great, it was fun noting the similarities and differences between the book and movie. The performance was pretty good, I even felt like I could hear a bit of Sean Connery in the reading of Connor's lines. Smith is nothing like Wesley Snipes however. In the book the character is white and comes off a bit different. Having seen the movie first and enjoying Snipes as Smith I didn't have any difficulty adjusting to Crichton's original version of Smith and from the beginning was able to get engrossed in the story. The only knock I'd give the performance is how annoying the reader does the voice of Smiths young daughter. Pretty bad. Fortunately she doesn't have many lines.
I've read that Crichton took some heat when the book came out, accusations of racism and Japan bashing. Having read that and then listening to this book I can *kind of* see how those criticisms got off the ground but overall I don't think that was his intention. I definitely wouldn't avoid the book based on that.
All in all I enjoyed it and am looking forward to moving on to Sphere.

The chief problem here is the Japan boosterism. When written, Japan was indeed 10-feet-tall, and it seemed likely that they were about to bury us. "Everything just works in Japan" is a constant refrain. Nowadays, after Japan's "lost two decades," the whole thing seems a bit silly.

I've seen the movie, but that didn't take away from the book at all what so ever. Great 'whodunit' with more twists and turns than you'd ever expect! Also the way MC weaves real information into a great story is unbeatable. Definitely recommend.

While the subject and fears expressed regarding Japanese economic supremacy are a bit dated now (the wheel always turns, and the Japanese are having their own economic woes now), the fundamental ideas are timeless. It does seem to be America's natural trajectory to go for the quick fix, the easy buck, and the superficial sound bite at the expense of introspection, long term prosperity, and self interest.

This work was widely criticized at the time for being racist and Japan-bashing (ironic, considering the role that such false accusations play in the novel itself), and indeed, when it was made into a the plot was substantially altered by the studio to make the villain an American for fear of offending the studio's Japanese investors (which would seem to prove the point of the novel). I believe this criticism to be invalid.

I hadn't read a Crichton for several years. Picked this one because it was said to be a bit different than his usual fare. It was and I liked it. The book is a fictional account of murder and mayhem in the US as a result of Japanese influences. The mystery of the murder is a good one and will keep you guessing. There is quite a lot of technological activity, most pointedly new advances in video "photoshopping" techniques which I found interesting. All in all, a good read, despite a few loose ends that I wished had been better concluded.

The epilogue, which features Crichton himself, offers a bit of factual theorizing on the precarious edge the US is walking in its relationship with Japan. Crichton suggests that as a debtor nation, the US is slowly but surely becoming far too beholden to Japan and sadly, powerless to do anything about it. Try this one. It is different and good!

entertaining but one sided

I knew this would be good and it was. You may feel some real bitterness at how all this started with our economy as Crichton paint a very clear picture of our downward spiral. Should be required reading. Really well done.

only negative is the ridiculous chapters of 4 hours each. one fumble and your searching an age.

Very much enjoyed this. Solid narrator, compact and fast-paced story; finished it in no time.

Superb narration of a terrific book, couldn't put it down as it were. Looking forward to the next Crichton book.