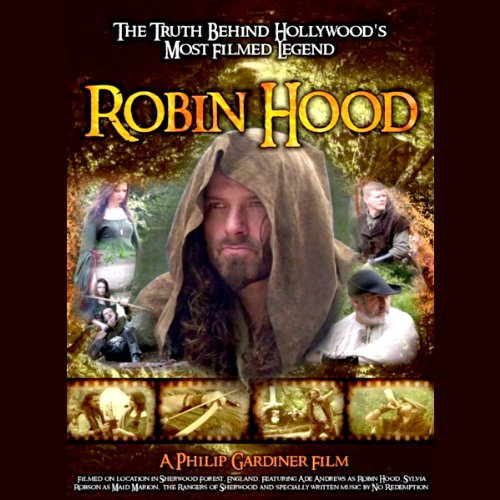 Robin Hood: The Truth Behind Hollywood's Most Filmed Legend

Robin Hood is probably the most legendary and well known character in the world. His exploits have been seen across the world in books, films, TV shows, and even computer games. But what is the truth about this enigmatic man? Russell Crowe plays the fictional movie character expertly, but the REAL Robin Hood is far more exciting than any fantastical Hollywood film.

Did Robin Hood, Maid Marion, and the Outlaws really exist? Where did these tales originate from? What is the amazing truth to the legend and myth? Here, best-selling author and award-winning filmmaker Philip Gardiner, goes on an amazing journey into the heart of the timeless tale of the Hooded Man. He travels back thousands of years and unlocks the mystery and the myth.

This audio was recorded on location in Sherwood Forest, England, which is the very same place that Robin Hood and his band are said to have called their headquarters. Gardiner is joined by a cast of real life outlaws, including the present day Robin Hood and Maid Marion.

Featuring beautiful music, produced by James Earnshaw and musical group No Redemption, this is a must for all fans of real life adventure and fantasy.

A case of destructive music!!

The information in this book was inviting and interesting, albeit a little sparce and strangely organized, but the musical soundtrack......absolutely horrendous!!!
Annoying, overly loud, stupidly edited, irritating, endless and like being poked with a sharp stick!!
What were the editors thinking?????
Skip this one unless you prefer listening to inane and overly self-inportant pseudo medieval musical clap-trap while trying to read.