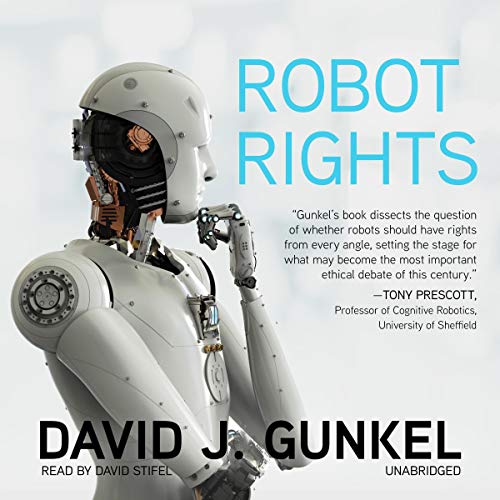 We are in the midst of a robot invasion, as devices of different configurations and capabilities slowly but surely take up increasingly important positions in everyday social reality - self-driving vehicles, recommendation algorithms, machine learning decision-making systems, and social robots of various forms and functions. Although considerable attention has already been devoted to the subject of robots and responsibility, the question concerning the social status of these artifacts has been largely overlooked.

In this audiobook, David Gunkel offers a provocative attempt to think about what has been previously regarded as unthinkable: whether and to what extent robots and other technological artifacts of our own making can and should have any claim to moral and legal standing.

In his analysis, Gunkel invokes the philosophical distinction (developed by David Hume) between "is" and "ought" in order to evaluate and analyze the different arguments regarding the question of robot rights. In the course of his examination, Gunkel finds that none of the existing positions or proposals hold up under scrutiny. In response to this, he then offers an innovative alternative proposal that effectively flips the script on the is/ought problem by introducing another, altogether different way to conceptualize the social situation of robots and the opportunities and challenges they present to existing moral and legal systems.

What listeners say about Robot Rights

Most of the book is a survey of what other people have said and written about robot rights. Each argument is looked at, scrutinized for problems, and held up against the others. Gunkel is a solid philosopher and does a great job of using terminology consistently, spotting errors of reasoning, and pointing out the strengths and weakness of each position.

In the final chapter he presents his own approach for considering robot rights based on Levinas's ethics of "the other" more broadly applied. This final chapter gets a little heady, but the rest of the book is very easy to follow even if you're doing something else while listening.

The book is more about deconstructing our preconceived notions of morality and human rights than it is about robots.

Stifel's reading if the text is good.