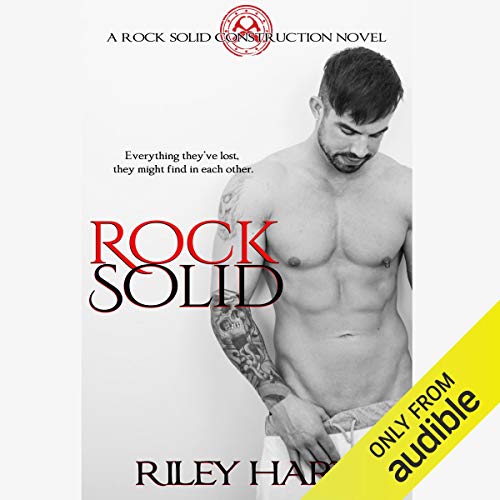 Trevor Dixon has made too many mistakes to count. Sober for 13 months, he's determined to do the right thing: rebuild his relationship with his family and help his brother get Rock Solid Construction off the ground. Failing them again isn't an option. Too bad the first estimate Trevor goes on alone is for an uptight doctor with a superiority complex.

A hand injury took away the only important thing in Dr. Simon Malone's life - performing heart surgery. He doesn't do well with people and has no family, but being a damn good surgeon? He always had that. Now he doesn't know who he is. The last thing he wants to deal with is the young construction worker who blows his shot at remodeling Simon's home.

Trevor and Simon form an unlikely friendship. The more time they spend together, the more Trevor starts wondering if maybe Simon's not as straight - or uptight - as he thought...and maybe Trevor's new attraction to Simon runs both ways.

There are too many reasons they shouldn't be together: They have little in common, their age difference, Trevor needing to focus on his sobriety...yet there's something about each other that they just can't shake. They don't feel so lost when they're together. But with their footing so unsteady, forming a relationship that's rock solid seems impossible. There's blow after blow, and the last one just might be powerful enough to crack their foundation for good.

What listeners say about Rock Solid

This is an interesting story, the struggles Trevor faces because of his past and how he struggles now is heartbreaking and eye-opening.

His past affects not only him but the people around him, the dynamic between himself and his family/friends is still taking the hit.

Then he meets and falls for Simon who also is struggling with his past.

I wasn’t sure if the chemistry was there for these two but it was and it was a great story of learning to trust and be trusted.

I very much enjoyed Joe Arden’s narration. He is a favorite of mine I hope he narrates more MM romance!

Wow. This was so real. I have a family member who is a recovering addict, and this hits so close to home. I could relate to the brother and mother’s mistrust and constant worry. I thought Riley portrayed Trevor's struggle and temptation very realistically. It made me think, however, that I need to show more empathy and be more patient (and discreetly hide the liquor and meds!).

Riley got this one right. This is her best! I’m so glad she didn’t trivialize the addict’s struggle. I appreciated that she gave us an insight in the addict’s internal struggle/thoughts as that was so powerful. I felt Trevor’s pain. I cried because of his poor choices. I understood his anguish. For the first time, I got it: Sobriety is an everyday struggle, which gives new meaning to 'one day at a time' as this story showcased. (A very powerful listen! Started listening last night and couldn't stop! Joe Arden nailed it, as usual.)

I loved Simon too. I enjoyed seeing his growth. His faith in (and patience with) Trevor made him such an admirable character. Their age gap was a non-issue.

I am an terrible addict and I'm also in the medical field, and on disability because I need a knee replacement. Now you are saying why is he putting all this personal stuff in this review? Well because these issues are all part of this great gay romance. I truly enjoyed it, but I was on pins and needles sometimes with what was going to happen. Even if all these things aren't as personal as they are for me, I truly believe you will enjoy this story and fall in love with the two main characters like I did. ENJOY!

Trevor is a recovering addict working for his twin brother, Blake, doing construction when he meets Simon. Simon is a cardiac surgeon who recently lost his ability to perform surgery due to a break-in and subsequent injury.

The two form a friendship based on running at first, then watching sports and finally they find they just enjoy being around the other. Two lost souls leaning on the other.

Trevor knows he’s gay and is immediately attracted to the “straight” Simon and is shocked when the actually bi-sexual Simon kisses him.

Though their relationship isn’t easy – neither man is free from his past – they take steps to making it work until one secret from the past haunts them to the point that being together looks impossible.

This was a tremendously great book, made even more so by the audio. The subject matter is fairly dark, similar to Riley’s Broken Pieces stories. Both men are very well developed and three-dimensional.

The mystery/hurdle/twist that throws the couple in to separation again is (maybe) a bit predictable but no more impactful.

Joe Arden is a great new narrator (to me) and his voice is very easy to listen to. He doesn’t do a lot to make the voices different but it was easy to tell who is speaking. I thoroughly enjoyed his narration.

For both the book and the narration 5 of 5 stars, highly recommended in either form.

This was my first audiobook on audible. A friend told me about another book on the site and it lead me to this one. I prefer third person narrative over first person and this book was great.

Loved the story and the characters. Devoured this book in about three days. Already eagerly looking for something new!

Emotional story about second chances at life, a story about two men who are struggling to accept who they are and their new lives. It’s a story about acceptance, family, friendship and love.
Riley Hart has the rare gift of leading the reader by the hand down a beautifully beaten path paved with rich emotions and vivid characters that draws you into a masterfully created and beautifully immersive world.
There is angst, romance, realization, growth, redemption, and forgiveness.
Trevor has been clean for over a year now. He struggles every day with his addiction. He even feels sometimes it’s better to stay on drugs and alcohol so you are numb and cannot feel emotions or pain. Simon is dealing with his own issues. He is trying to find himself now that everything he thought he was has been taken away. Injured in a home invasion, he can no longer perform surgery. This was his life, his dream.
When these two get together, they are exactly what the other needs. They heal each other. Their love for each other was beautiful!

What made the experience of listening to Rock Solid the most enjoyable?

The story had good bones soon that helped

What was one of the most memorable moments of Rock Solid?

Trevor figuring out the connection he had to simons past

Did Joe Arden do a good job differentiating all the characters? How?

stop living in the past

the story had good bones, the narrator i wish could have given the characters more pizzaz and let them truly find there voice

Loved the story and character development. The reader's voice was difficult to get used to though.

Couldn't put it down. I started in the morning and finished later that evening. I just love Riley Hart

Love Joe Arden and Riley Hart so I thought this would be a great listen. Not really sure why it wasn't, but it wasn't. Nothing really stands out as being the cause so maybe it was just me.

This was a good story, well narrated. I enjoyed the end - picked up the rest of the story.