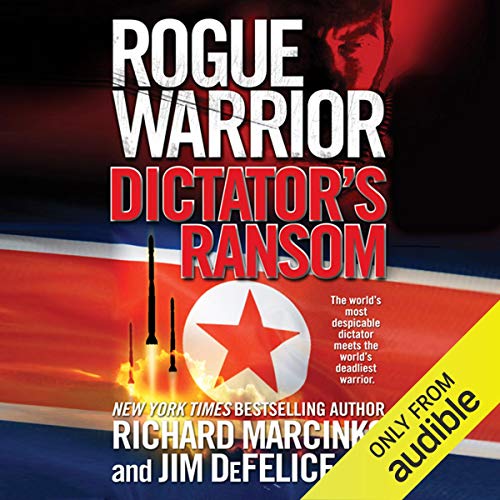 Was Kim Jong-il really a fanatical fan of Dick Marcinko, the Rogue Warrior? Had the terrifying tyrant actually read every one of Marcinko's many New York Times best sellers? One thing is certain: The Rogue Warrior wants nothing to do with the brutal despot. When, in Dictator's Ransom, the "loathsome dwarf" - as George W. Bush derided him - invites Marcinko to the Hermit Kingdom, the Rogue Warrior instantly declines...prompting the CIA to RSVP on his behalf.

Marcinko is to track down four covert nuclear warheads secreted in the Supreme Leader's palace. More than just a thriller, Dictator's Ransom is a novel of electrifying energy and wicked wit.

An overall decent book. this isn't my favorite Rogue Warrior story but it's also not the worst. Overall I would say it's a solid story. I prefer when Dick narrates the story but the narrator overall was okay. I really wish the original Rogue warrior book would come to Audible and Dick would read the unabridged version that book is by far the best of the series being that it is non-fiction. the first Rogue Warrior title is one of my favorite books of all time if you haven't read it check it out.

couldn't finish it, didn't want to...

It was OK but didn't flow well

Do you think Rogue Warrior: Dictator's Ransom needs a follow-up book? Why or why not?

Couldn't stand the narrator, just awful, but the story wouldn't have been helped much if it'd be a different one either, it was a bit comical but I guess fairly entertaining if you're in the right mind-set - I prefer non-fiction SEAL / warfare stories better!

more please... this was action packed .