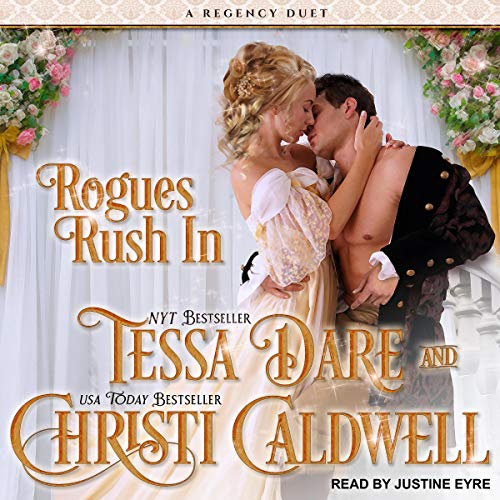 His Bride for the Taking: It's the first rule of friendship among gentlemen: Don't even think about touching your best friend's sister. But Sebastian, Lord Byrne, has never been one for rules. He's thought about touching Mary Clayton - a lot - and struggled to resist temptation. But when Mary's bridegroom leaves her waiting at the altar, only Sebastian can save her from ruin. By marrying her himself.

His Duchess for a Day: It was never meant to be... That's what Elizabeth Terry has told herself while trying to forget the man she married - her once best friend. Passing herself off as a widow, Elizabeth has since built a life for herself as an instructor at a finishing school, far away from that greatest of mistakes. But the past has a way of finding you, and now that her husband has found her, Elizabeth must face the man she's tried to forget.

What listeners say about Rogues Rush In

This one is hard to rate since I LOVED the Tessa Dare story but not so much Christi Caldwell. I had to keep skipping ahead in the Caldwell book. SO BORING. It was all inner thoughts and exposition. Blah. Blah. Blah. Nothing happened until the last few chapters. Then even when there was a possible good scene with his icky mother, we missed the good part where Crispin tells his mother off and the mother's reaction. Boring.

However the Tessa Dare story is TERRIFIC and definitely worth a read. Justine does a great job. I'll probably keep it just for the Dare story. But I wouldn't bother unless you get on sale. Only half good book. I would have rated the Dare book 5 stars...but simply couldn't rate the Caldwell book high so the overall rating suffered.

Both little stories require a lot of reader patience to track through the numerous predictable switchbacks caused by the characters' overwrought scruples.

The first story was good. Minimal angst, happy ending.
The second story was okay. I just can’t get into a heroine who is supposed to be intelligent and courageous but gives into a blackmailer (always dumb) and ran away rather than tell her best friend the truth. Supporting herself is great and all, but it takes more courage to stand up to a bully and be honest with the ones we love. But I guess it’s ultimately a story of character growth in both the H and h. Also, I feel like this story is intended to be regency, although I could be off on that. If it is a regency, the entire thing would’ve come off far more believably to me as a Victorian. Neither the H or h’s professions would’ve been completely unrealistic, nor the basic plot.
Finally, Justine Eyre is a solid narrator so that’s a plus.
Overall, it’s probably worth a credit if you’re a fan of either author, definitely worth a download if it shows up in the Plus catalog.

I am a fan of twists that could have been easily solved if people would just talk to each other. The younger selves of the protagonists think that their love is unrequited. It’s not easy being open and vulnerable to another. Much like Persuasion by Jane Austen, however, they mature and have another chance which is not squandered despite challenges. It’s quite fun watching these pairs find their way to a HEA together.

His Bride for the Taking: When Sebastian, Lord Byrne begins distancing himself from his childhood friend’s sister, Mary Clayton takes matters into her own hands. After being left at the altar, Mary has no choice but to marry her brother’s best friend. This friends-to-lovers story has a lot of twists and turns. I loved it and found Mary to be a strong and capable female who knows how to manipulate life’s events to make the most of it. She is the type of woman who works to make the world fit her needs. A smart woman is a force of nature.

His Duchess for a Day: Some mistakes are worth repeating. Though Elizabeth Terry isn’t so sure she agrees when her husband finds her at a finishing school for young ladies. When he convinces her to return for a day to put marriage-minded mamas in their place, they are faced with the past and have to decide if they can keep from making the same mistakes twice.

aggravating struggle throughout. would have liked

would like more joy in the book instead of misunderstanding and cruelty. Not uplifting but depressing for a story.

That about sums up my opinion. Even the Christi Caldwell piece was good! It's my opinion that she usually is, but often has trouble getting out of her own way with her tendency for inner dialogue.

Both pieces we short, sweet, well done, and enjoyable. Both had the good fortune of being performed by a first class narrator as well.

Worth a credit? Hmmm., I guess I have to say YES!

This is TWO shorter stories

The description of this book is actually of the second of the two stories. The first story in this book starts with a young woman jilted and her brother’s best friend rescuing her reputation by marrying her instead.

The length of the books makes them a bit simple and not all that interesting, verses a full length book. The second story uses a style where frequent flashbacks tell details of the story, but the way it is done is actually a bit disorienting, at least in audio form.

I really enjoyed both these stories and Justine Eyre’s wonderful narration topped it off beautifully!

One great story, one less so

Tessa Dare’s story was delightful but the second was repetitive and had far too much telling rather than showing. Too much time in the heads of the protagonists who weren’t interesting enough to warrant it