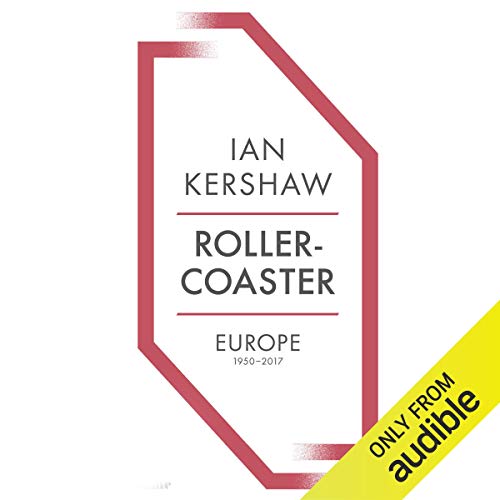 From one of Britain's most distinguished historians and the best-selling author of Hitler, this is the definitive history of a divided Europe, from the aftermath of the Second World War to the present.

After the overwhelming horrors of the first half of the 20th century, described by Ian Kershaw in his previous book as having gone 'to hell and back', the years from 1950 to 2017 brought peace and relative prosperity to most of Europe. Enormous economic improvements transformed the continent. The catastrophic era of the world wars receded into an ever more distant past, though its long shadow continued to shape mentalities.

Europe was now a divided continent, living under the nuclear threat in a period intermittently fraught with anxiety. Europeans experienced a 'roller-coaster ride', both in the sense that they were flung through a series of events which threatened disaster but also in that they were no longer in charge of their own destinies: for much of the period the USA and USSR effectively reduced Europeans to helpless figures whose fates were dictated to them by the Cold War. There were striking successes - the Soviet bloc melted away, dictatorships vanished and Germany was successfully reunited. But accelerating globalisation brought new fragilities. The impact of interlocking crises after 2008 was the clearest warning to Europeans that there was no guarantee of peace and stability.

In this remarkable audiobook, Ian Kershaw has created a grand panorama of the world we live in and where it came from. Drawing on examples from all across the continent, Roller-Coaster will make us all rethink Europe and what it means to be European.

What listeners say about Rollercoaster

The book is a disappointment, a waste of a brilliant historian. It is neither an introduction for those who know little history nor a stimulus for those who do. It will not be on my Christmas coffee table. Those who commissioned the book did not know what they wanted and Kershaw did not seem to know what to give. Not a book for the cold, snow bound winter months but a good undemanding read for beach next summer. It is so difficult to decide who I could give this book too for Christmas season.

Doing it for the money?

Way too soon. The worst history i’ve downloaded on Audible. Great respect for Sir Ian, but this feels like paper never refused ink. Type EEC into wikipedia instead, and take it from there. The narrator presents a parade of cheesy accents straight out of ‘Ello, ‘Ello.

Like its predecessor 'Hell and Back', 'Rollercoaster' is an absolutely monumental work of history. Kershaw's ability to thoughtfully synthesise military, political, economic, social, and cultural history from dozens of countries is simply peerless. He has insights and observations that will surprise and provoke any reader, even those that already have a good knowledge of Europe in this era. He is a master of relating the telling personal detail to illuminate the grand sweep of events. It's hard to imagine that a better book on this topic will ever be written.

The narration, too, is excellent - making such a lengthy, complex text easy to follow is no mean feat.

The lack of proper named chapters, however, is pretty irritating. It is unfortunately common for Audible books to be divided into chapters that do not correspond the chapters in the book. For a novel, this is usually a mild annoyance at worst, but it's a more serious flaw in a long factual work like this. The book is split into mostly arbitrary 25-30 minute chunks that are simply named 'Chapter N', with no clue as to their content or how they link to the actual numbered chapters in the original work. This makes it essentially impossible to navigate without making one's owns notes.

I don't know whether Audible/Amazon or the publisher (or both) is at fault here, but either way it detracts significantly from what is otherwise a landmark achievement.

A well laid out presentation but fundamentally from a centrist left view point. For a British writer he falls into the tired cliche of always finding fault with Britain and our leaders. Nonetheless if I can forget my frustration with a typical Guardian writer it helps explain where the EU is coming from and the threat it posed to the British, thankfully we are away from all that now.

Ok but the reader should learn how to pronounce “nuclear” properly!!!

Ok but the reader should learn how to pronounce “nuclear” properly!!! It is NOT pronounced as “nucular”. After all, it is his job!

A primer - with dreadful narration

A bit too basic - too much description and too little analysis. But the narration is what caused me to give up early - when you’ve heard ‘nuke-u-lar’ dozens of times you start to hear nothing else (well, except for the stereotyped accents that add nothing and take much away). Read the book if you’re looking for a primer on post-war Europe.

Another excellent book from Kershaw

Excellent book, well - researched and written, and wonderful delivery from the narrator. Let down slightly by its somewhat pro-EU/anti-Brexit stand towards the end.

A great follow up to his previous work on Europe "To Hell andBack"
It provides clarity and context for relatively recent historical events and remains balanced and objective throughout
It has a good title as well - Rollercoaster aptly summarises the amazing changes in Europe over the last 60+ years
Really enjoyed it.

An excellent start to those interested in modern European history. Great for an introduction into further reading and study, and covers all of the essentials. Well narrated by Mr Pugh.

Cold War and After

I struggled with this a bit. It is not enough to consider Europe in isolation especially in this era of globalisation. I found there was little reflection on world events.

A well written and generally well narrated book covering Europes political/social/economic story from post-war austerity to its eventual modern-day prosperity (relative to where it was in 1950!).

Frustratingly however the last few hours feel more like leftist winging as the authors own political rhetoric consistently bleeds through into their writing, almost to the point where you begin to notice the underlying resentment clearly directed towards recent political, economical and social events such as Brexit.
For me, I personally prefer my history served right down the impartial middle, as opposed to…. “this happened, which equals good”…. or ….. “this event transpired which equals bad”. It gets on my nerves when historians paint history with their own narrative, just tell it has it was and let the reader make up their own mind on what’s wrong or right,

All that said, and credit due where it’s due. This book is well presented, thorough in its analysis, and quite thought provoking. It’s just the last 3/4 hours that are tarnished by left wing bias.

A must read for all to understand the background to so many of the issues that affect the world - and not just Europe - today.