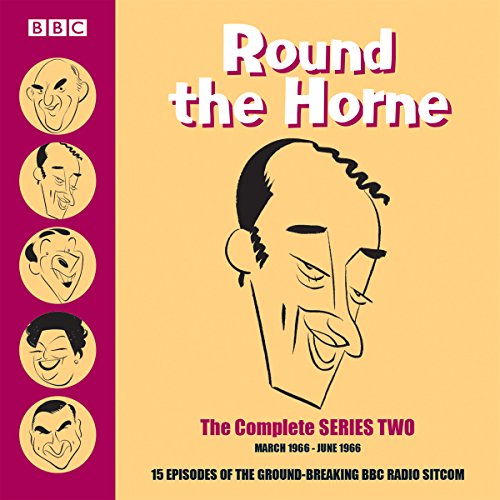 Round the Horne: Complete Series 2

Round the Horne arrived on BBC radio in 1965, bringing laughter to Sunday lunchtimes throughout the land. Over the course of 16 weekly episodes it carved a niche in the history of broadcast comedy, a sketch show which prodded the boundaries of propriety and innuendo.

At its heart was the suave and upstanding Kenneth Horne, around which revolved the multiple naughty personas of Kenneth Williams, Betty Marsden, Hugh Paddick and Bill Pertwee.

Among the parade of regular characters were Julian and Sandy, the camp couple of resting thespians happy to turn their hands to anything, Rambling Syd Rumbo the musical cordwangler, Fiona and Charles the passionate duo, and J. Peasemold Gruntfuttock the world’s dirtiest man.

Round the Horne earned its place in the annals of comedy history and is fondly remembered today as a groundbreaking series that influenced many more to come.

Here the entire second series can be enjoyed once again, plus the 1966 Christmas episode, "The Hunchback of Notre Dame", and a special Transcription Services episode, "The Man with the Golden Thunderball".

Total and utter genius. I embarrassed myself by frequently laughing out loud in the street.

Doesn't date.A treat.Incidentally,each episode has extended variations of the theme tune at the end.Probably filling in time,but interesting nonetheless.

What can you say. Timeless classic that fills the void in life. Such a boast for someone who suffers from Mental Illness.

I remember listening to this show when I was a small boy, lying on the hearth rug in front of the fire after Sunday dinner. I laughed then at ideas and concepts I didn’t really understand, now I can’t believe they got away with so much! Betty marsden’s “Many times, many many, times” and kenneth’s Need to be “serviced” leaves you you wide eyed and jaw droppingly shocked...if you want to laugh out load then this series is a must. Brilliant people talented and very very funny.

From the scriptwriters to the actors and actress, just pure funny classic comedy that puts modern ‘so called’ comedy to shame.... If you can’t laugh at this you are in trouble as a breathing human.