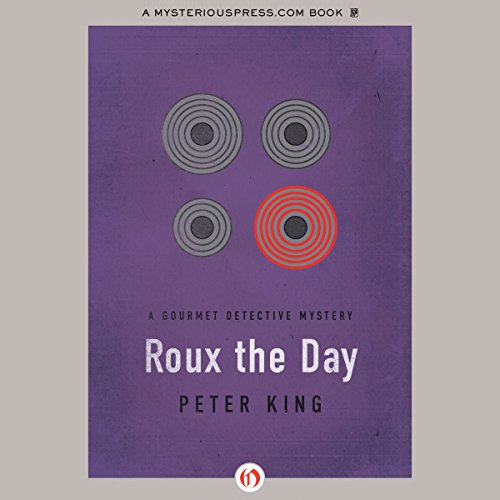 For six generations, the Belvedere family dominated the culinary landscape of New Orleans, a city that boasts what is perhaps the most vibrant, exciting, and authentic cuisine in America. But each generation relinquished control of the family restaurant - best known for its world famous Oysters Belvedere - only after succumbing to the madness that has plagued the dynasty since its arrival from the Canary Islands. Now, after the business' doors have remained closed for years, the next scion of the Belvedere clan has determined to seize his birthright...if only he can find the annotated family cookbook, which has mysteriously disappeared!

Only one man can help. That man is the Gourmet Detective.

Returning for his seventh foray into the bizarre nether-regions where haute cuisine meets high crimes and misdemeanors, Peter King's beloved sleuth reluctantly agrees to track down the book. But this decidedly out-of-print classic isn't going to turn up on any remainder shelf! And when he finds its supposed new owner - a used-book dealer - stewing in a puddle of his own blood, the Gourmet Detective knows that, once again, he's in for more than he bargained for.

Soon, he's "kidnapped" by the WITCHES, a mysterious cadre of New Orleans' most ambitious and talented female chefs - and they want the book, too. In fact, it seems like everyone does. And getting it will have the sleuth staring down con-artists and book forgers on an old-fashioned paddle boat, careening through the colorful streets of the French Quarter in a mule-drawn carriage, and hunting down leads in the vibrant fishing shanties of Algiers.

All of this, while exploring the very contentious differences between the proponents of Creole and Cajun cuisine, and sampling some of the most spicy and succulent treats he's yet encountered: from blackened redfish, fresh from the Gulf and coated in garlic, paprika, cayenne and an assortment of spices, then seared in an extraordinarily hot cast-iron pan...to turtle soup, dark, rich, seasoned with onion, oregano, and thyme...to pheasant casserole...to Gumbo, catfish, crawfish...and that's just a taste!