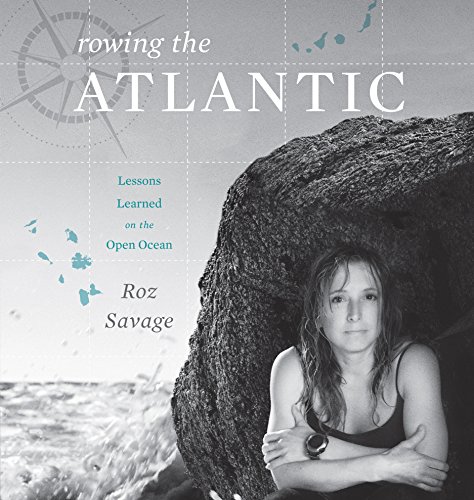 Stuck in a corporate job rut and faced with an unraveling marriage at the age of 36, Roz Savage sat down one night and wrote two versions of her own obituary - the one that she wanted and the one she was heading for. They were very different. She realized that if she carried on as she was, she wasn't going to end up with the life she wanted. So she turned her back on an 11-year career as a management consultant to reinvent herself as a woman of adventure. She invested her life's savings in an ocean rowboat and became the first solo woman ever to enter the Atlantic Rowing Race. Her 3,000-mile trial by sea became the challenge of a lifetime. Of the 26 crews that set out from La Gomera, six capsized or sank and didn't make it to the finish line in Antigua. There were times when she thought she had hit her absolute limit, but alone in the middle of the ocean, she had no choice but to find the strength to carry on.

In Rowing the Atlantic we are brought on board when Savage's dreams of feasts are nourished by yet another freeze-dried meal. When her gloves wear through to her blistered hands. When her headlamp is the only light on a pitch-black night ocean that extends indefinitely in all directions. When, one by one, all four of her oars break. When her satellite communication fails. Stroke by stroke, Savage discovers there is so much more to life than a fancy sports car and a power-suit job. Flashing back to key moments from her life before rowing, she describes the bolt from the blue that first inspired her to row across oceans and how this crazy idea evolved from a dream into a tendinitis-inducing reality. And finally, Savage discovers in the rough waters of the Atlantic the kind of happiness we all hope to find.

As gripping as it is insightful!

On top of being an excellent story-teller and narrator, Roz Savage never failed to paint her account with the nuanced brush strokes only someone who'd actually lived the adventure could do. I marveled at her powers of description, not just of the row itself, but of her self-discovery throughout the endeavor.

This book is at once entertaining, inspiring, insightful, and thought-provoking without being weighty or preachy.

Read second book first, found ahe wrote a previous book and couldn't wait to read it. She inspired me to keep go trying at my sport. Amazing woman and writer. I can't wait to read another book by Roz!

A Story of Perseverance

Incredible story that really shows how mindset and heart can overcome doubt and struggle. Took me a while to finish this book. However, the last 3 chapters really brought it all together for me and it's where I felt the most emotion in reading this book.

I thoroughly enjoyed it - it was inspiring and fun, I felt like I was part of the adventure. Thank you Roz!

boring. too many side anecdotes. too many cliche ' reflections'. i couldn't persuade myself to listen to end. stopåed in ch. 4

Words aren't really any good at explaining how good this book was for me.

Roz Just wanted to say thank you for your inspirational story. You have balls of steel and you allowed me to live vicariously through you. Rowing an ocean is Something I would not dare to do in reality but mentally was there all the way with you on your journey.
Was very moving particularly at the end.