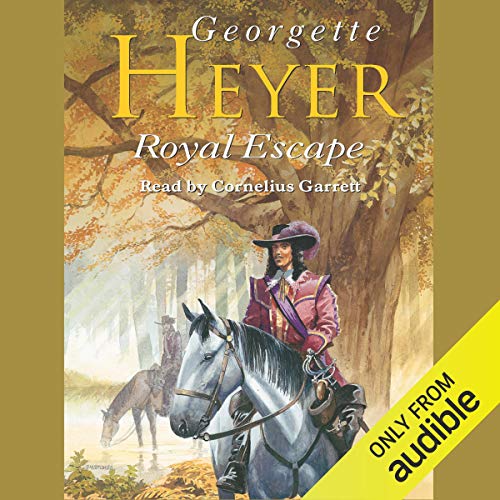 Dispossessed of crown and kingdom, crushed and routed at the Battle of Worcester, the young Charles II is forced to flee for his life. Out of the heat of battle, the outlaw king and his tiny party must try to escape to France.
©2001 Georgette Heyer (P)2014 Audible, Inc.

This is not exactly a "romance novel", but it is good history even though the "Marie King's" escape takes a long, long time. The reader did a very good job with a subject that got tiresome at times.

If you could sum up Royal Escape in three words, what would they be?

Left me with a desire to read more books about Charles II. Very easy entertaining listening.

Which character – as performed by Cornelius Garrett – was your favorite?

I normally love Heyer's novels, but I find her historical books quite tedious. This one is no exception, and I struggled to get through it. It is well narrated, but that cannot make up for the fact that everything happends really slowly. It deals with Charles II and his escape from England, it takes him an entire book to escape. Perhaps if I was more conversant with history around this event, I would have enjoyed the book more, but I feel that a good historical novel shouldn't rely on the reader's previous knowledge.

More of a 17th Century Travelogue than a Novel

It is hard for me to make too many negative comments about a Heyer novel. And I knew what to expect when I started this book. As every reviewer stated, there was very little plot and the tension one would expect in a story about a fugitive attempting to escape from certain death, was definitely lacking. Charles II on the run for his life seemed to approach the world and his predicament with the same joie de vivre and humor as the 19th century courtiers in her Regency comedies of manners. It was obvious that Heyer found him a very sympathetic character and considered his adversaries as simpletons. It was in some ways one of her most "classist" novels, and that is saying a lot.

All of that said though, it is still a well written book and she managed to stretch out a six week adventure in rural England with a predetermined ending into a readable and lengthy book. I know that Heyer has a reputation as a stickler for accuracy in historical detail, but I have no idea how much of this story is true, beyond the battle itself, the king, Wilmot and the fact that they did eventually escape to France. But she certainly presented a plausible and believable tale of what very well might have happened.

I usually enjoy Cornelius Garrett's narration on Heyer novels. But he always has to make at least one character have a very annoying lisp. He did it in this book as well, and I found it even more annoying than usual.

I still recommend the book. But go into it with your eyes open. This does not have the plot, pace or conclusion of other Heyer books, whether her romances, mysteries or other historical fiction.

This will take a couple of listenings to get all the intricacies, but I find this account of Charles II fascinating. Well performed as well.

Just read it for the second time.This time I had a map in my hand, and Wikipedia to look up all of the real people in the book to find out what happened to them during the Restoration.
It would’ve been cool if she had an epilogue to show that.
Cornelius Garrett is one of my favorite readers!

This is unlike most of Georgette Heyer's sparkling comedies being about the escape from England of King Charles II after a losing battle. Her historical search shines through but it has the light touch I would expect from her writing.

There are occasional comic moments, usually involving one of his loyal companions who thinks changing his coat is enough to disguise his appearance and is put out when he is recognised immediately. There is the odd moment of flirtation between the king and two of the women who help him along the way and more than usually frank references to his free and easy manner with women.

Heyer plays it very straight and keeps the action bowling along nicely.

The narrator has a pleasant reading voice and uses different accents and tones well to indicate the different characters. It's a good listen though I don't imagine listening to it again as I do with Heyer's other books.

God Save the King

1651 The battle of Worcester and its aftermath detailing the Scottish Betrayal of King Charles II and the incredible escape of Charles to France thanks to the loyal and trustworthyness of those he meets on his journey. Ordinary men and women risk all as do a Priest, some noblemen and a ship's captain each of whom is promised their reward when the Monarchy is restored. An enjoyable and accurate story due to Georgette Heyer's painstaking research.