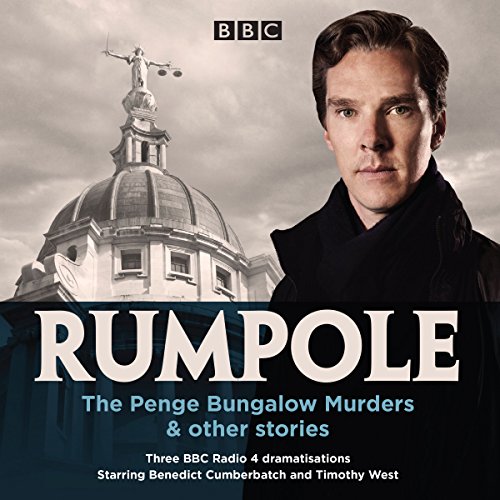 Rumpole: The Penge Bungalow Murders and Other Stories

Rumpole and the Penge Bungalow Murders: It is the '50s, and two war heroes have been shot dead. Defending the suspect is deemed hopeless, so the case is handed to a novice. But the novice's superiors didn't count on the tenacity and wit of the young and hungry Horace Rumpole as he defends the accused alone and without a leader for the very first time. This two-part adaptation of the novel by John Mortimer also marks the beginning of Rumpole's lifelong liaison with Hilda ("She Who Must Be Obeyed").

Rumpole and the Family Pride: We rejoin Rumpole and Hilda in the late 1950s, when they have been married for a year or two. Hilda's cousin lives with her husband, the 17th Baron Sackbut, in Sackbut Castle on the Yorkshire Moors. Hilda and Rumpole are invited to the castle when a body is found in the grounds. Meanwhile, in London, Rumpole defends a tramp who has confessed to a triple murder.

Rumpole and the Eternal Triangle: When Rumpole and Hilda attend a concert performed by The Casterini Trio, Rumpole is surprised to be approached by Elizabeth Casterini - the trio's beautiful violinist. But then, the trio's cellist, Tom Randall, is murdered. Elizabeth's husband is arrested, and Rumpole agrees to defend him at the Old Bailey.

What listeners say about Rumpole: The Penge Bungalow Murders and Other Stories

superbly done Benedict , typical British humour, enjoyed every bit of it. looking forward to the next part

Loved it...Rumpole senior and junior were so good. story was so engaging. A treat!

loved it.. found a few actors from cabin pressure.. mystery and intrigue with a barrister's flair

Rumpol, once again entertains with his dry wit and logical mind This is a fun read, narration is very good.

great read and Mr Cumberbatch is the man!

I highly enjoyed the stories and what else can i say about Mr Cumberbatch? I will listen to any book he's narrating.

I totally enjoyed the 'book' but I would have preferred a true reading of Mortimer's text.

These short mysteries were delicious!

I used to sit in my car after an insanely long day just to hear the "who dunnit" ending to the very late at night radio mysteries. Each turn, twist and clue....you really have to be listening. These were well written, the cast played them wonderfully and the endings sweetly unexpected!

Rumpole is far different from Poirot

I did not know anything about the Rumpole series before picking this audiobook up. Having enjoyed previous BBC Radio dramatizations I felt this one would be enjoyable as well. The multi cast members gave a wonderful performance and these three short stories were interesting. Unfortunately I don’t believe I will buy another Rumpole book. It is interesting to see a mystery unravel from a lawyer’s viewpoint vs a detective’s, however I did not enjoy this book as much as I do Agatha Christie’s Hercule Poirot books.

Very British, very enjoyable. The whole cast was the making of the audible version. More please.

Of course, was Rumpole ever really young? He was probably born a curmudgeon and Timothy West, who reads the Rumpole stories on audio and does so wonderfully, also plays the older reflective Rumpole to perfection here. But Benedict Cumberbatch adds a wry, dry twist to these stories that always leave me wanting more. Perfect casting all the way around -- and effective abridgment of the original by the writers and producers.

A absolute joy to listen too, the cast was wonderful. Just sit back and be transported back to Rumpole of the Bailey’s wit and “she who must be obeyed”.

The first of the BBC Rumpole dramatizations with a great cast including Timothy West and Benedict Cumberbach as the old and younger Rumpole. Very old fashioned and English. It's gentle comfortable feel good listening. I will probably purchase the others, although not immediately.

Great stories, with a full cast. Timothy West as the old Rumpole really shines. This really brings these stories to life.

Don’t start with this Rumpole - 5*

Best start with some other BBC Rumpole dramatisations before this one. Why? Well in this release we find out how he met his wife, Hilda ‘she who must be obeyed’ and listen to his eminent case ‘the Penge Bungalow murders’ which he often refers to in other stories. [Search under “BBC Rumpole”; currently there are two other previous releases available on Audible.co.uk.] It’s much more interesting finding out these things at a later stage.

Lastly there are two Rumpole’s in this production, not that the front cover eludes to that. Benedict Cumberbatch plays the ‘young’ Rumpole, and Timothy West is the ‘elder’ incarnation. I assume due Mr Cumberbatch’s higher profile, poor Timothy got bumped from the front cover. Both are equally superb.

The mysterious and oft-quoted triumph of young Horace in the Penge Bungalow Murders - alone and without a leader! - explained, as well as the inexplicable courtship of two strong but superficially incompatible characters. The combination of Timothy West and Benedict Cumberbatch as Rumpole in grumpy maturity and in embryonic form in his early career works well. (On radio, don’t think it would work visually!) Both are versatile actors and the audio format has the great benefit of engaging the imagination of the audience without any distractions. Obviously it also allows actors who are in great demand to take on more roles and more diverse parts than would otherwise be possible. Three cheers for BBC Radio 4!! I’m so glad Audible gives us the opportunity to own radio classics (Yes, Minister, The Hitchhiker’s Guide to the Galaxy, Old Harry’s Game, Cabin Pressure....) as well as a plethora of books, including a growing collection of works in languages other than English.

What would have made Rumpole: The Penge Bungalow Murders and Other Stories better?

Two of the Chapters are repeats from other books

What could John Mortimer have done to make this a more enjoyable book for you?

Had New stories included in this book

An enjoyable time spend with Rumpole and his adventures

I enjoyed the point of view of the more mature Rumpole and also the general cast and crew for producing such an excellent work. I didn't need to close my eyes to imagine the places Rumpole was at or with whom; as the background noises, the massive cast that took extra roles and all the massive work that has happened behind the scenes produced such an entraining result. I must admit of not knowing anything about Rumpole before I listened to this audio book but now if BBC4 does another audio book like that for Rumpole I am sure to get it!

Excellent narration, true to the original

I've loved the book and TV series and this version kept true to both. The narrator and actors were good and lived up to how I pictured the characters. It kept a good pace, I listened in one go and I will listen again.

A quality production and professional performance of gentler times.

I enjoyed the “book” very much.

At last the truth about the Penge Murders

I've enjoyed Rumpole on the radio for years and years, so there is something wonderfully heat-warming and comforting about listening to them.
The cast do a terrific job, and these are just a lovely listen. All the characteristics a steaming cup of tea in front of the fire after a long walk in the cold and wet. Ahhh!

Cumberbatch does it again

he didn’t do it all though. The entire cast was excellent. Obviously the writing superb.

My only complaint is I wish these full-cast plays were longer! Rumpole comes to life as Benedict Cumberbatch takes on the younger form of Horace Rumpole. Really good...more please!

Brilliant stories. I was so engrossed listening to this audio book. It felt like I was seeing this at the movies. I would love to hear more stories of Mr Rumple.